How Russia Nearly Wiped Out the Ukrainian Air Force 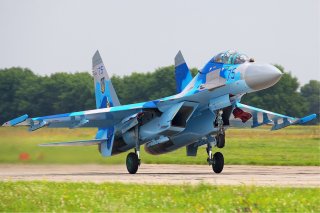 A year of fighting starting in 2014 cost Ukraine a full half of its fighter jets, cargo planes and military helicopters. It was one of the most precipitous war-time declines for any air force in recent decades.

In early 2014, before Russian forces invaded Ukraine’s Crimean peninsula and subsequently came to the aid of pro-Moscow separatists in eastern Ukraine, Kiev possessed 400 military aircraft, according to Flight’s annual survey of world warplanes for 2015.

A year later, that number has plummeted to just 222.

The Russians captured some aircraft. Others crashed. Rebels and Russians shot down many others. Potentially dozens of warplanes had lain around unused for years prior to the conflict and simply proved too decrepit to return to flight, finally compelling Kiev to remove them from its inventory.

Whatever the exact reasons, no other military—not even Syria’s or Iraq’s—has suffered such heavy losses in current conflicts.

Indeed, the 178 planes and helicopters that Ukraine lost accounted for a third of the decrease in total world air power holdings in 2014. In 2015 the world’s governments boasted a combined 51,685 military aircraft, down 459 from the prior year.

For the record, 13,902 of those 51,685 airplanes and rotorcraft, or 27 percent, belonged to the U.S. military. Russia had the second-largest aerial force with 3,429 military aircraft—seven percent of the world total.

That changed in the span of a year. “The conflict has taken a heavy toll on Ukrainian forces,” Flight noted.

When Russian troops swept into Crimea in February 2014, they overran a number of Ukrainian air bases and captured scores of aircraft, many of them in poor condition and unable to take off.

The Russians actually returned some of the planes they captured, including a Beriev seaplane that Ukrainian officers promptly sent back into action. Some Ukrainian aircraft narrowly escaped advancing Russian troops under their own power. Kiev’s engineers also managed to disassemble, pack into crates and ship north other aircraft, including some MiG-29 fighters.

But the losses mounted. And as the war expanded to Ukraine’s east, Kiev’s pilots found themselves conducting air attacks against pro-Russian separatists armed with high-tech surface-to-air missiles—one of which destroyed a Malaysian airliner over Ukraine in July 2014, killing 298 people.

The rebels also took a toll on Ukraine’s air force, army aviation and naval air arm. After nearly a year of battle, Aviation International News tallied Kiev’s combat losses—at least 22 aircraft, and possibly many more. Twenty-one fell to surface-to-air missiles. A Russian MiG-29 fighter shot down one Ukrainian MiG-29 with a missile it reportedly fired from inside Russian air space.

It was unclear exactly how many Ukrainian aircrew and passengers died in the shoot-downs. We know for sure that 49 people perished when a separatist missile struck one of Kiev’s Il-76 transport planes.