How Russian Oligarchs Changed the Country—and Not for the Better 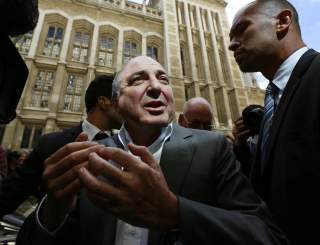 With the impeachment hearings for President Donald Trump under way, several American diplomats and ambassadors have testified about the influence of oligarchs on the Trump administration.

I am a scholar of international law who has been working in the Soviet and post-Soviet space since the early 1990s. As the impeachment hearings in Washington take center stage and talk turns to the politics of Ukraine, I believe it’s important to understand what oligarchs are and what power they wield.

The History of Oligarchs

Over 2,300 years ago, Aristotle coined the term oligarchy as he contemplated the forms of state governance.

Like aristocracy, oligarchy meant rule by the few, as contrasted with democracy, which is rule by the people. From Aristotle’s time until the early 1990s, the concept of an oligarchy – and oligarchs – largely remained the stuff of academic writing.

But with the breakup of the Soviet Union, a new group of actors emerged. In the early 1990s, these men ate lavish meals in the newest hotels and built massive houses on the outskirts of Moscow. They mostly were young players in the financial sector who were able to finance Russia’s first post-Soviet president, Boris Yeltsin.

These oligarchs were not formally part of the government. They were private individuals who benefited from government connections to amass huge wealth in short periods.

This wealth came from the privatization of state enterprises, a process developed and driven by American and Western European academics.

I covered the role of organized crime in Russia in the early 1990s and witnessed firsthand the transfer of wealth from the state to a handful of individuals, all of whom had ties to Russia’s leaders.

By owning the major industries – from oil and natural gas to steel, nickel and other basic industries – Russian oligarchs held sway over all aspects of daily life. With time, they expanded to other areas, such as media and sports. But, at their core, the oligarchs gained their wealth from industry and wielded their power openly and with impunity.

Over the past 20 years, the number of oligarchs has grown, but the base of their power remains the same: a relationship with the president that leads to personal financial gain.

As Russian President Vladimir Putin told the Financial Times earlier this year, “Oligarchs are those who use their proximity to the authorities to receive super profits.”

Putin effectively offered an alternative, modern definition of oligarch. And like Yeltsin, Putin has been responsible for the rise – and, on occasion, the fall – of Russia’s modern oligarchs.

But oligarchs are not restricted to Russia. And this is why we have been hearing the term so often in recent months.

In Ukraine, the spring 2019 presidential election that led to the stunning rise of actor-turned-politician Volodymyr Zelenskiy was as much a referendum on Ukraine’s oligarchs as it was about the two men vying to become president.

I was in Ukraine during the first round of the presidential elections this year, and all of the Ukrainians I spoke to said the same thing about Zelenskiy: No one knew who he was, but it didn’t matter. That’s because the person in control, they said, was Ihor Kolomoisky, whose wealth had been threatened by Petro Poroshenko, Ukraine’s then-president, who was running for reelection.

In the eyes of Ukrainians, Kolomoisky needed a candidate to run Poroshenko out of office. And in Zelenskiy, he found his man. Zelenskiy was not just an actor before he turned to politics abruptly to run for president. He was an actor on the television channel owned by Kolomoisky.

So as we hear talk of oligarchs and Ukrainian politics, it is important to remember that while these ultrawealthy individuals are not formally part of the government, as Aristotle might have envisioned, they are very much in charge of the country’s economic, media and political interests.