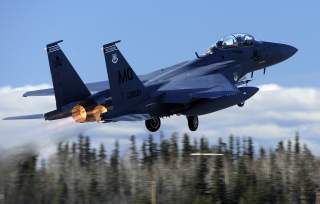 As we have already explained for more than 40 years the F-15C Eagle has defended the skies with a track record of success unlike any other fighter jet in the history of aviation.

A claim confirmed by the fact that the Eagle has an unmatched air-to-air kill ratio of 104 to 0.

Thanks to its updated weapon systems the mighty F-15 will likely serve for decades to come, but does the venerable Eagle still have what it takes to dominate the skies?

According to The National Interest the answer is “yes—absolutely.” The Eagle may be old, but it’s still one of the best air superiority fighters flying. The only operational aircraft that is definitively superior to the F-15 in most respects is the Lockheed Martin F-22 Raptor—other machines have the edge in certain aspects, but the F-15C is still competitive overall despite what the business development departments at various rival contractors might say.

Moreover the F-15 is able to enhance the already incredible capabilities of the F-22: as we have reported in fact during Weapons Systems Evaluation Program (WSEP), held at Tyndall Air Force Base (AFB) in March, 4 F-15s and 4 F-22s teamed up achieved an incredible 41-1 kill ration in mock air combats against “red air” fighters.

Perhaps the most advanced threat the F-15 is likely to encounter is the Russian Sukhoi Su-35 (NATO reporting name Flanker-E). While there are more advanced threats in development, those aircraft are likely to be too expensive to ever become commonplace. The Su-35 isn’t the most common potential threat out there, but there is a good chance it will proliferate.

The Su-35 matches or even exceeds the capabilities of the latest upgrades for the F-15. In fact, even if the Flanker-E is slightly slower than the F-15C in terms of max speed, it can out-accelerate the Eagle with its powerful twin Saturn Izdeliye 117S engines, which put out 31,900lbs of thrust each. Moreover, the Su-35 can maintain supersonic speeds without the use of its afterburners when it is lightly loaded.

Where the Su-35 has an insurmountable edge is at low speeds where thanks to its three-dimensional thrust vectoring is incredibly maneuverable. Nevertheless, given the advent of helmet mounted cuing systems and high off-boresight missiles like the AIM-9X and Russian R-73, more often than not, close in visual encounters tend to be “mutual kill” situations as many pilots can attest.

At longer ranges, the F-15C and the F-15E still have the advantage over the Su-35 with their active electronically scanned array radars. The Raytheon APG-63 (v) 3 and APG-82 (v)1 on the two Eagle variants are still considerably superior to the Su-35’s Tikhomirov IRBIS-E phased array radar. The Su-35 does hold a fleeting advantage for now for passive sensors since it has a built-in infrared search and track (IRST) system, but the F-15C fleet will soon receive Legion Pod IRST which will nullify the Flanker’s edge.

According to The National Interest one area the Flanker-E probably holds the edge is with its electronic warfare suite. Acttually the Su-35 features a potent digital radio frequency memory jamming suite that can wreck havoc with the AIM-120 AMRAAM missile. While American missiles are likely to eventually make it through, it will take many more missiles to achieve a kill than planners were counting on. By contrast the Su-35, meanwhile, carries a huge arsenal of air-to-air missiles versus the F-15 fleet’s obsolete defensive electronics. The U.S. Air Force (USAF) is keenly aware of the problem, which is why it places such emphasis of on the $7.6 billion Eagle Passive/Active Warning and Survivability System upgrade.

The real dilemma is that the Su-35 and the F-15 Eagle are comparable and that’s what is worrisome for the USAF. The service in fact is used to fighting adversaries where it has a huge technological advantage—against the Su-35 that deficit does not exist and the Flanker-E even has some advantages over the Eagle. Overall, if all things were equal, even a fully upgraded F-15C with the latest AESA upgrades would have its hands full versus the Su-35. But that would mean the U.S. would be fighting a war against Russia or some other great power—like China. That’s not likely to happen.

More likely to happen is that a F-15 would run into a Su-35 operated by some Third World despot. The pilots are not likely to have the training, tactics or experience to fight against an American aviator with a realistic chance of winning. Further, Russian jets are not exactly known for their reliability, combine that with poorly trained maintenance crews and lack of spare parts, some random Third World power is not likely to be able generate a fully operational jet much of the time. Moreover, other than Russia and China, a potential adversary is not likely to have an AWACS or full ground controlled intercept capabilities—which further hampers the enemy.

In other words, it might not be the one-sided turkey-shoot the Air Force has gotten used to, but the U.S. isn’t in danger of losing air superiority.