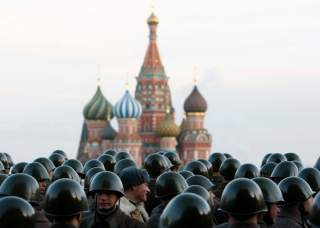 Operation Bagration, which was conducted in 1944 between June 22 and August 19, was perhaps the single most successful Soviet operation of World War II. The goal of the operation was ambitious—the destruction of the German Army Group Center as well as the liberation of Belarus. The success of Bagration would also enable sequential operations across the entire theater to retake western Ukraine and enter the Baltics States and Poland. To do this, Russia used a strategy of deception and intelligence operations designed to disrupt Germany’s center of gravity.

After an elaborate maskirovka (deception) campaign, which ensured the bulk of German Panzer divisions remained in western Ukraine and northern Romania for the critical first week of the operation, the Soviets unleashed four fronts on German Army Group Center, catching the Germans by surprise. The defeat was devastating for Germany. Besides losing most of Army Group Center, the German front receded 240–310 miles in depth and was broken in two, isolating Army Group North in the Baltic States. Bagration systematically reduced German armored formations and placed the Soviet Army in an excellent position to press the advantage into Poland and the Balkans.

This enables opportunities to pursue non-traditional avenues of attack, where intelligence and deception in combination with a coordinated and well-executed operational maneuver create a critical imbalance in the enemy’s correlation of forces. As Bagration shows, this is not just an asymmetric tool for the weaker side, but a critical advantage which should always be pursued. In our modern age of high tempo and highly destructive warfare, the lessons of Bagration resonate as strongly as ever.

An off-balance center of gravity today creates vulnerabilities even greater than in 1944. For instance, reaction times are much shorter and destructive power is much more accurate and prompt. In addition, the ever-present specter of nuclear weapons presents combatants with the temptation to pursue short, decisive wars to quickly alter the situation on the ground and then dare their opponents to either escalate significantly or accept the changes in the status quo. Instances include the invasion of Georgia in 2008, the takeover of Scarborough Shoal in 2012 and the annexation of Crimea and the destabilization of eastern Ukraine in 2014. These all demonstrate how a decisive and prompt aggressor power can use force to change de facto borders and escape retribution, at least militarily.

It also does not take much effort to think of such a strategy being applied against Taiwan or the Baltic States. For example, where those states to be overrun in a short period of time, then the West might be unwilling to risk theater-wide war for something that is already lost. Furthermore, even if the West did, the correlation of forces may be too imbalanced to be able to meaningfully challenge the invasion immediately. All the aforementioned operations succeeded because the West, the enforcer of the status quo, was caught off guard. Therefore, despite the repeated emphasis on information dominance and stealth, contemporary Western military commentary does not pay sufficient attention to deception on a grand scale.

To illuminate the potential of the synergy of operational combat and deception, one must outline how the operational level is of warfare different from the tactical and strategic levels. All three levels can be discussed based on the following constitutive “principles;” a) the contingent anticipation (i.e., what kind of activity is expected to occur); b) the plan of action and its goals; c) the allocation of resources; d) the orchestration of assets, and, ultimately; e) the social objective. Here, the meaning of social objective refers to the specific desired outcome of a project which requires the synergy among various social agents, and which underlines the complex nature of war.

The operational level of war is critical in that it connects strategy and tactics. It is actually the manifestation of strategy. More explicitly:

• The contingent anticipation of the operational level is maneuvering, the employment of formations over multiple engagements.

• The plan of action aims to destabilize the enemy’s center of gravity and to produce collapse, encirclement, and annihilation. The drive against the Schwerpunkt (the main target/axis of advance) takes priority in resource allocation.

• Assets are used sequentially, one maneuver or engagement executed after another as part of a greater plan to control the center of gravity. Soviet doctrine, in particular, emphasized the timely sequential application of reserves.

• The final social goal is to generate momentum to constantly keep the enemy off balance.

Operation Bagration and its follow-on operations are an exemplary case of the application of operational principles with excellent maneuver, large and properly committed reserves, and decisive generation of momentum to produce shock and awe. The Soviets were able to destabilize the German center of gravity, the armored reserve, before combat even began, by employing deception.

The success of Operation Bagration depended on achieving operational surprise and keeping heavy German reinforcements away from the area of operations. The Soviet deception operation was clearly aimed at exploiting the biases of Hitler and the German High Command. The deception plan was simple. The Soviet General Staff would exploit the existing German expectation of a continuation of attacks in Ukraine, where they had already been conditioned to focus on after the successful Soviet winter campaign, to divert attention away from the main attack in Belarus. Through a combination of radio silence, strict planning secrecy, large-scale camouflage and cleverly keeping assault units in Western Ukraine and Romania for the Germans to see while building brand new ones in Belarus, the Soviets were able to keep the Germans completely blind to their plans.

The Soviets were also able to apply the principles of operations discussed previously so successfully because of deception. In fact, the entire operational plan mainly relied on fixing the German center of gravity—the armored reserve—in Western Ukraine and Romania. Of particular importance was the redeployment of the LVI Panzer Corps from Belarus to Ukraine to face the expected Soviet offensive there. Maskirovka not only kept additional reinforcements away from the target area but succeeded in dramatically improving the correlation of forces with little cost and no risk to the Red Army.

Since maskirovka was formulated and directly controlled at the highest levels of authority, the Soviets were able to augment the application of all previously discussed principles of operations. They were able to sequentially commit mobile reserves to drive deep inside Belarus along multiple axes of advance. The success of deception in Bagration caught the Germans off guard, and the subsequent breakout caused them to shift reserves to Belarus rapidly. This only exasperated the destabilization of the German center of gravity allowing the Lvov-Sandomierz and Romanian operations to enjoy the initial advantage Bagration did. At the theater level, the planned sequential operations masterfully exploited the use of Soviet reserves, while constantly striking were the German reserves were not. The social objective, both within Bagration itself and the theater level, was fulfilled completely, with Soviet forces gaining tremendous momentum.

None of this extraordinary sequentiality could have been achieved however without successful maskirovka. By keeping the Germans continually blind, maskirovka prevented them from properly applying the principles of operations. Under contemporary conditions, camouflaging large concentrations of troops is harder given the advanced state of surveillance technology but not impossible. The Kosovo War clearly demonstrated that decoys can still be useful in misdirecting even modern systems. Moreover, surveillance technology has still not solved the problem of identifying an adversary’s intent. In a modern context, repeated snap exercises, gradual force buildups, and constant provocative behavior short of aggression can serve to both induce complacency in a defender, wear down his alertness, as well as confuse him as to the direction and purpose of a possible attack. Russia and China are currently involved in generating such “white noise.” On the one hand, Russia grabs the headlines with its large-scale snap exercises, harassment of North Atlantic Treaty Organization warships, and strategic bomber probes against North America. On the other hand, the Chinese have also been active in conducting military exercises and desensitizing Western intelligence to large numbers of vessels in the South China Sea. This normalization of elevated military activity makes it easier to disguise an even greater buildup or misdirect observers as to the direction or manner of an upcoming attack. This potentially exposes the West to a Bagration style center of gravity destabilization, where the bulk of Western forces remains unaware of a changing adversarial buildup, aligned in the wrong direction, or expecting the wrong manner of attack. In other words, the technology and methods have evolved, but the underlying principles have not changed.