How to Secure the U.S. Capitol: The U.S. Army Can Stop Another Attack 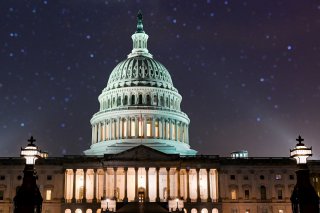 Following the fast-unfolding mayhem on Capitol hill and the need to respond quickly, Pentagon leaders are now emerging to detail some of the DoD response to the crisis. Army Secretary Ryan McCarthy explained that DC authorities asked the Army for help, prompting a fast reaction.

"Yesterday (Jan. 6) was a horrible and shameful day here in the capital, and the nation at large," Army Secretary Ryan McCarthy said, according to a Pentagon report. "The District of Columbia asked the Army for help, and our National Guard responded."

Interestingly, McCarthy explained that the National Guard was already prepared to ensure stability following the expected peaceful protests, yet naturally, a need for a larger and more serious response quickly changed the equation.

“Based on this request, officials called up 340 National Guardsmen to help in the peaceful protests. The guardsmen were assigned mainly to traffic control, Metro crowd control, some logistics support and a 40-member quick reaction force to be based at Joint Base Andrews in Maryland,” the Pentagon report says.

While hoping to defer in large measure to D.C. and Capitol police to the maximum extent necessary, there are some key ways a military force could secure the area and address the security concerns while taking precautions to prevent anyone from getting hurt.

For instance, the Guard could quickly establish a safe perimeter around the Capitol perimeter, and certainly, Army infantry know how to clear a building. For instance, teams of soldiers could enter the Capitol building and ensure that intruders were taken out. Violent disruptors could be held at gunpoint and, of course without being shot, be required to leave peacefully.

Following years of counterinsurgency in Iraq and Afghanistan, one thing U.S. Army infantry know how to do …..  is enter a building, quickly identify threats and establish a secure environment without firing a shot, if possible. Soldiers recently spent many years conducting these operations, so certainly clearing the Capitol would not seem to present an overwhelming challenge; it seems entirely possible the Army could accomplish this without a shot being fired.

As part of an effort to establish a secure perimeter, another thing the Army knows how to do is disperse a crowd as safely as possible. Then of course tactical vehicles, armed with .50-Cal machine guns if necessary, could patrol the streets to ensure safety.

While some of these things may seem self-evident, they would come to fruition through the implementation of carefully cultivated combat and security techniques which the Army has spent years conducting and refining. Walls, open areas, corners, and closed doors all present specific tactical nuances Army infantry are trained to address, in fact, it would not be a stretch to say that, while the circumstance was not necessarily analogous to an engagement against heavy enemy fire, procedures of this kind might nevertheless call upon U.S. Close Quarter Combat training. Observation and intelligence, often fast-changing and in response to rapidly arriving new information, are of course crucial to the rules of engagement.

The U.S. Army has now had years of experience working quickly to discern who armed insurgents might be … and who are not combatants. After all, the Navy SEAL raid on Bin Laden’s compound offers an example of how trained soldiers knew how to avoid non-combatants, yet engage armed threats. This kind of rapid discernment and observational tactics would likely be needed in a circumstance wherein there could be some armed intruders but likely little offensive hostile fire. The Army knows how to do this, one reason why D.C. authorities may have been quick to call for support once actual violence against the Capitol was recognized.

Certainly, given the appropriate divisions of various U.S. authorities, few if any would like to see any kind of substantial military presence patrolling the streets of D.C., the escalation of the protests and the established use of mob violence against the U.S. Capitol building, may have required it.