How to Sink a 'Battleship': Why Sea Mines Can Sink Any Navy in a War 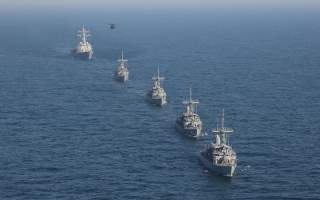 Key Point: Although deadly, innovative drones might reduce their effectiveness.

Though often overshadowed by anti-ship cruise and ballistic missiles, sea-mines are amongst the oldest, cheapest and most dangerous anti-access/area denial (A2/AD) threats faced by the United States Navy. Indeed, since the end of the Second World War, sea-mines have damaged or destroyed more U.S. Navy ships than any other type of threat. Moreover, while only major powers like Russia, China or Iran can afford high-end A2/AD weapons such as supersonic sea-skimming anti-ship missiles, sea-mines are available to even the poorest of coastal states.

“Sea mines, one of the oldest weapons in the naval inventory, are often the cheapest and most available form of anti-access/area denial weapons to a vast number of maritime nations,” said retired U.S. Navy Capt. Jerry Hendrix, director of the Defense Strategies and Assessments Program at the Center for a New American Security. “Even if their budget will not allow them to purchase high-end missiles or aircraft, most maritime nations can afford to sink any number of mines off their coast in order to dissuade another power from approaching their shores.”

To make matters worse, sea-mines are not only cheap and deadly, they are also vexingly difficult to find—even with modern equipment as the Ticonderoga-class guided missile cruiser USS Princeton (CG-59) discovered during the first Gulf War in 1991. The multi-billion dollar Aegis cruiser was severely damaged by a pair of Italian-made MN103 Manta sea-mines that cost only a few thousand dollars. Earlier, a First World War-era mine nearly sank the guided-missile frigate USS Samuel B. Roberts in 1988 during the Iran-Iraq War.

However, technology might be on the verge of making the lives of Western sailors safer. Drones will allow the U.S and allied naval forces to counter the threat without directly putting their lives in jeopardy. Northrop Grumman announced recently that it will be participating in the British Royal Navy's Unmanned Warrior exercise where the American defense giant will demonstrate its unmanned mine hunting capabilities. During the exercise, Northrop will show-off its AQS-24B towed mine hunting sensor, which will be operated from an Atlas Elektronik UK ARCIMS Unmanned boat.

The AQS-24B towed mine hunting sensor is already being used by the U.S. Navy. According to Northrop, the AQS-24 features the world's only high speed synthetic aperture sonar for mine detection, localization and classification as well as an optical laser line scan sensor that is used for mine identification. Meanwhile, the ARCIMS is a small boat measuring 11 meters long, which will be operated via remote control while towing the AQS-24B through a simulated mine field according to the company.

While the Northrop demonstration is for the Royal Navy, the U.S. Navy has also extensively explored the use of drones to hunt for mines. The U.S. Navy’s Littoral Combat Ship (LCS) features a mine-hunting module that will rely primarily on unmanned watercraft to detect and neutralize mines. However, the primary system, called the Remote Minehunting System has been cancelled. But there are two other mine-hunting drones in the package including the Textron Common Unmanned Surface Vehicle (CUSV) and the General Dynamics Knifefish unmanned underwater vehicle which fill different niches in the mix.

But while the U.S. Navy is working on fielding a mine warfare package on the LCS, the unglamorous weapons have always been treated as an afterthought despite the enormous toll they have taken. The Navy must place mine-warfare at the center of its future fleet design, argues Bryan McGrath, managing director of the naval consultancy FerryBridge Group.

“The problem of the sea-mine is ancient and persistent. It is a cheap method of sea denial, and while often inefficient, very deadly,” McGrath told The National Interest. “The Navy’s future fleet architecture must place this threat to the fleet centrally in its planning.”