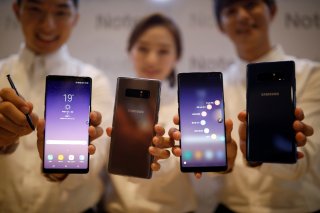 Smartphones in North Korea, it’s fair to say, don’t work the same they do in most of the Western world. Mobile phones were banned in North Korea until 2008. While 5G is rolling out in much of the world, North Korea is still on 3G, with recent reports indicating that a 4G deployment may soon be on the way.

Reuters wrote in 2019 that North Korea was evading sanctions and “using low-cost hardware imports to generate significant income for the regime.” Most North Korean phones, at the time, used Chinese batteries, Taiwanese semiconductors, and a version of the Android operating system.

Some mobile phone games have become popular in North Korea, with names like Taekwondo Competition and Badminton Competition, which are played over Bluetooth connections. Late last year, there were reports that North Korea was cracking down on Chinese-imported cell phones, with the regime even holding lectures “emphasizing that people who use Chinese-made mobile phones will face punishment.”

The Daily Mail, meanwhile, reported earlier this month that North Korea had passed a law cracking down on “perverted” language, with checks on people’s phones, to examine whether they had used such language in private messages, part of the enforcement.

Now, a new report looks at the software that is used in North Korea to bypass the security authentications that have been put in place by the regime.

Both types of software run on Windows 7 and 10. The software helps bypass the software function, mandated by the regime, to delete unauthenticated files on users’ devices.

In addition, the installation guide for the Bidulgi software, also obtained by Daily NK, describes it as “a program that converts multimedia files like text, videos and music so you can use them on mobile devices such as mobile phones.” The manual also states that some files might not convert because they are “in use” or “state-approved,” and it says that the files may not work if the IMEI of their phone differs from that of the device where the file was first converted.