How a South Pacific War Between America and China Might Begin 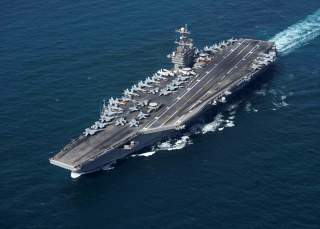 “Romeo’s closed up,” came the call from the port bridge wing. Raising the red and yellow romeo flag to the top of the stays was the signal USS Omaha, an Independence-class Littoral Combat Ship, was beginning its approach to the Japanese oiler Mashu.

Lieutenant Junior Grade Hassan Caterall’s hands betrayed a slight tremor as he flicked his eyes in the direction of his Executive Officer, the ship’s second-in-command. The XO, Commander Morgan Dennis, a former enlisted sailor with more than 20 years in the Navy, hovered over the console between Hassan and the ship’s Navigator, Lt. j.g. Mike Dunleavy. Dennis’s eyes moved continuously, alternately looking out the windows ahead, down at the radar and navigation displays in front of his junior officers and towards the bridge wing where the ship’s captain stood, watching and measuring the distance to the oiler.

Hassan had completed the training required to drive the LCS just three weeks prior. He thought ruefully about how he and his classmates had spent most of their free time in class bitching about how unrealistic and unnecessarily rigorous the training was. Now he found himself about to make a silent, nighttime approach in wartime conditions to a foreign oiler and silently thanked his instructors. He shifted in his seat. His flame-retardant flash hood pulled at his neck. He was wearing the hood pulled down so as not to restrict his vision; his gloves sat in his lap to allow for maximum dexterity while controlling Omaha’s sensitive waterjet engines.

With his left hand, he eased the combinator, which controlled Omaha’s waterjets, forward, increasing power. The combinator clicked and locked in his hand. He stifled his momentary panic and relaxed his hand while counting to four, just as he’d been taught. At four, he eased the combinator forward again, allowing himself to exhale as he felt the ship surge forward. Out of the corner of his eye, he saw the shark-like silhouette of the Arleigh Burke-class destroyer O’Kane, backlit by the moon as she searched for enemy submarines.

The South Pacific War, as the media called it, had come without notice. The Chinese executed simultaneous attacks coinciding with two American freedom of navigation operations or FONOPs. In the first, the Ronald Reagan Carrier Strike Group, sailing through the Taiwan Strait, found itself saturated with ballistic and anti-ship cruise missiles, resulting in the worst U.S. Navy losses since the battle of Savo Island. Only the destroyer John McCain had limped away, sustaining multiple missile hits to her superstructure and scores of dead.

The second FONOP, at Mischief Reef in the Spratly islands, ended similarly when Chinese fighters operating from the new airfield at Fiery Cross Reef flew in below the horizon and surprised the destroyers Chung-Hoon and Chafee. Both ships were hit multiple times. Nearby Chinese naval militia in unmarked fishing vessels immediately swarmed, overwhelming the crews with the result that the two American hulks were taken as prizes and moored to a pier at Mischief Reef. An exultant Chinese government immediately released images of the listing ships pierside, Chinese flags flying from their deformed masts. An unknown number of Americans remained on the island as prisoners, complicating plans for a retaliatory strike.

The attacks were just a distraction for the long-anticipated move against Taiwan. With the 7th Fleet Carrier Strike Group at the bottom of the Straits of Taiwan, a large Chinese amphibious force sortied from the fleet base at Ningbo and landed all along Taiwan’s west coast. Despite fierce opposition, Chinese special forces who had infiltrated the populace, a seemingly endless supply of ballistic missiles and China’s unfettered ability to pour in more troops meant the Taiwanese struggle, while valiant, was ultimately doomed.

Chinese missile salvos against Guam and the remaining 7th Fleet ships in Yokosuka and Sasebo, Japan rendered the U.S. Navy impotent west of Pearl Harbor. The Japanese, who had seen much of their own fleet destroyed, were supporting their American allies with two surviving Kongo-class destroyers, the diesel submarines that were underway at the time of the attack, and a trio of ships that had been visiting the American east coast on a training cruise. The Australians had immediately pledged support, but their units were patrolling far to the south. America’s European allies were still mulling over their positions.

American fortunes had improved slightly since the opening onslaught. A decision to eliminate Chinese satellites had resulted in a tit-for-tat exchange that destroyed both countries’ known GPS constellations and reconnaissance satellite coverage. The result for the U.S. Navy was a dramatically reduced Chinese ability to surveil the Americans. The U.S. Air Force had thrown up an improvised constellation of miniature satellites to partially restore American reconnaissance and geolocation services. The satellites, due to their size and number, were proving much harder for the Chinese to locate and destroy.

A Chinese sally from beneath their protective ballistic missile umbrella had been smashed when a pair of American submarines had devastated one of two Chinese carrier strike groups and an accompanying amphibious force. American submarines had performed exceedingly well, doing enough damage to cause Chinese commanders to pull Chinese submarines back into coastal waters. On the heels of those successes, the U.S. Navy would attempt its first tentative step forward to push back the Chinese bubble using its most unlikely platform, the Littoral Combat Ship.

Omaha and her Surface Division 11 sisters, Jackson, Montgomery ,and Gabrielle Giffords, had originally been conceived as “Surface Warfare” variants of the Littoral Combat Ship. Each nominally carried a crew of 74, 16 short-range Hellfire missiles and eight Kongsberg long-range Naval Strike Missiles. She and her sisters were now loaded, however, for far more than surface warfare.

SurfDiv 11 had rendezvoused with the Belleau Wood Amphibious Ready Group near Palau a day earlier. Omaha and Jackson had each taken aboard two companies of marine infantry and three Viper helicopters. Gabrielle Giffords embarked a team of maintainers for the Vipers, Marine logisticians, and pallets of small arms ammunition and food. Montgomery received a platoon of marines, a number of large, nondescript boxes, and a team of contractors. Aboard Omaha and Jackson, the Vipers were fully armed, fueled, and strapped to the flight deck. The infantrymen were packed into what, in peacetime, had been cavernous, and often empty, mission bays. Hassan had walked past the bay on his way to the bridge before watch, noting every square foot of space now seemed to be occupied by someone in digital green camouflage.

Before getting underway, each LCS received a hasty alteration to the massive mission bay door on the ship’s starboard side. Rather than a hydraulically operated mechanism to open the door that allowed cargo to be loaded and unloaded directly from the mission bay to the pier, each door was now rigged with a relatively simple pin and wire mechanism to turn it into a ramp that could be raised and lowered. The alteration allowed a single crewman to rapidly drop the ramp by hammering out a pair of retaining pins. The ramp would have to be reseated by a team of 10 sailors pulling it manually back into place.

It wasn’t until the ships were underway, leaving San Diego behind at a brisk 40 knots, that Omaha’s Commanding Officer, Captain Mark Dewitt, assembled the crew to explain the mission. Jovial and relaxed in peacetime, the weeks of conflict had taken a toll on Dewitt. Dewitt paused briefly while providing an overview of the early American defeats, gathering himself as he recounted events that had resulted in the deaths of numerous friends. Hassan thought the Captain’s face betrayed his weariness. He wondered if he was the only one who noticed.

Omaha and SurfDiv 11 were to be part of a massed, high speed assault on the Chinese base complex in the South China Sea. After a series of cross-Pacific, 40-knot sprints from oiler-to-oiler (the LCS was notoriously thirsty for fuel and had minimal tank capacity), the ships would embark marines near Palau, conduct a final refueling in the Celebes Sea, and then dash the remaining 800 miles to the Chinese base at Fiery Cross Reef.

Their arrival would be preceded by a barrage of Tomahawk missiles launched from American ships and submarines and Conventional Air-Launched Cruise Missiles fired from Air Force B52s. The Vipers would be launched in advance of their arrival at Fiery Cross to suppress enemy defenses further. SurfDiv 11 was to charge the piers, blasting shore targets with the ship’s 57 mm gun and Hellfire missiles while using the incredibly maneuverable waterjet engines to get pierside long enough to drop their ramps and allow the Marines to storm the pier. The marines would be outnumbered, but the general in command was counting on the combined firepower to shock the Chinese and allow his marines to overwhelm the defenses long enough to fly in reinforcements from a base in Palawan.