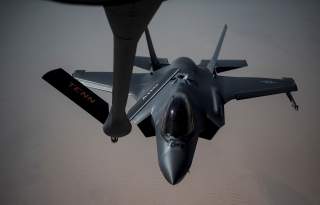 The May 2019 delivery means the number of F-35As in Air Force service “is one more than the total number of F-22As built,” journalist Steve Trimble tweeted.

But the fighter indisputably is becoming an important part of the Air Force’s force structure. It flew its first combat sortie in April 2019 over Iraq. It played a major role in a large-scale exercise with Air Force F-16s. The flying branch plans to establish an aggressor squadron that will fly early-production F-35s in order to simulate enemy stealth fighters for training purposes.

All of these milestones are possible only because the Air Force is purchasing large numbers of F-35s. The service, by contrast, spent more than $60 billion buying just 195 twin-engine F-22 Raptor stealth fighters from Lockheed before production ended in 2011. That’s around half as many F-22s as the Air Force said it needed.

After crashes and the retirement of a few test aircraft, the F-22 fleet totals 186 aircraft. A shortage of F-22s has complicated Air Force planning. After five years of continuous operations, F-22s in March 2019 left the Middle East. Older F-15Cs and later F-35s took their place.

The Air Force after the storm shuttered one of the six front-line Raptor squadrons and redistributed its 18 planes to the remaining five units, hoping that fewer but bigger squadrons would make better use of the precious fighters.

The flying branch is so desperate for F-22s that it invested millions of dollars and years of labor restoring an old test-model F-22 for an additional few years of trials.

Comparatively, the abundance of F-35As lends the service greater flexibility in employing the type. The Air Force aims to acquire more than 1,700 of the planes at a cost of $400 billion.

The same week that Air Force F-35s dropped their first bombs in combat, F-35s from the same Utah base took part in a sprawling aerial war game involving dozens of warplanes flying more than 100 missions.

Around the same time, the news broke that the Air Force plans to re-establish a defunct squadron that as recently as 2014 flew F-15s to simulate the enemy force in realistic war games.

The 65th Aggressor Squadron in its new form would operate early-model F-35s that aren’t suitable for combat, allowing the Air Force to copy the tactics of Russian and Chinese squadrons respectively flying Su-57 and J-20 stealth fighters.

The stealth aggressor squadron will fly from Nellis Air Force Base in Nevada, where the Air Force hosts its annual Red Flag exercise. It’s unclear when the unit will restart operations. The 65th Aggressor Squadron five years shut down as a cost-saving measure.

Despite flying combat sorties and playing an expanding role in training, the F-35 still is a work in progress.

Only half of the F-35s were flight-ready during one eight-month period in 2018, according to am April 2019 report from the U.S. Government Accountability Office. A lack of spare parts grounded the fighters around 30 percent of the time.

“In 2017, we reported that [the Defense Department] was experiencing sustainment challenges that were reducing warfighter readiness, including delays of six years in standing up repair capabilities for F-35 parts at its depots and significant spare parts shortages that were preventing the F-35 fleet from flying about 20 percent of the time,” the GAO explained.

“Specifically, the F-35 supply chain does not have enough spare parts available to keep aircraft flying enough of the time necessary to meet warfighter requirements.”

Acting Defense Secretary Patrick Shanahan, a former Boeing executive, famously described the F-35 program as “fucked up.” His office approved a proposal from one military analytical group for the Air Force to begin buying as many as 144 new F-15EX fighters from Boeing in order to complement the F-35.

The F-15EX is more reliable and cheaper to operate than the F-35 is, Air Force officials claimed. But Air Force chief of staff Goldfein told Defense News that buying F-15EXs would not impact the service's planned acquisition of F-35s.