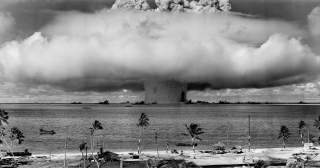 States in the Pacific islands are small in landmass and population. Their limited terrestrial resources and lack of comparative advantage are compounded by their remoteness from global centres of commerce. This obviously has impacts on the costs of doing business and integration into global trade relations. Their invisibility in international relations means that small states must creatively frame their presence in the global community.

It’s against this backdrop that the ‘Blue Pacific,’ which is touted as an empowering worldview, should be understood. The core principles of the Blue Pacific must be read together with recent developments in the region. In 2017, Pacific Islands Forum leaders endorsed the concept as a ‘driving force’ connecting Pacific peoples ‘with their natural resources, environment, culture and livelihoods’. The Boe Declaration of 2018 formally recognised Pacific islanders’ stewardship over the Pacific Ocean.

While big states such as the US and China are competing for influence in the region, the Boe Declaration makes a case for prioritising the concerns of Pacific island communities. The strategic confrontations of big powers do not feature in the daily lives of Pacific peoples. What’s important to the survival of island states is their environment and the capacity of their resources to meet present needs and the needs of future generations. This logic is seen with the proposed Pacific Resilience Facility, which is a regional pool of resources to manage or mitigate the adverse effects of environmental challenges in the region.

The Boe Declaration and the Blue Pacific concept demonstrate that the geographical fragmentation of small states in the Pacific shouldn’t constrain their contributions to global areas of cooperation. Pacific island states have some of the world’s largest exclusive economic zones. The EEZs are the true measure of the islands’ potential wealth and size.

The renewed emphasis on the Pacific Ocean as a medium connecting the common destinies of Pacific communities has its merits. Collective diplomacy, and especially the use of multilateralism to advance collective outcomes, is the main beneficiary. The Blue Pacific celebrates success stories of Pacific regionalism, but it’s also a rethinking of strategies for collectively dealing with current challenges, both man-made and natural.

But for all its high-minded idealism, the Blue Pacific must also embrace uncomfortable realities. Pacific islanders can be modest. Confrontation is often shunned as uncouth behaviour. Islanders have long used consensus as a means of resolving complicated regional matters. Such approaches might not be appropriate when trying to get powerful states to participate in dealing with pressing regional problems.

One example of a sticky issue in the region is the potential effects of nuclear contamination of the Pacific Ocean. The legacies of nuclear tests in the Pacific islands include highly radioactive waste materials stored on vulnerable atolls.

In the 1950s, the Pacific Ocean was considered an empty space by the Euro-American powers. With the onset of the arms race during the Cold War, some of the colonial powers used the Pacific as a testing ground for their nuclear weapons. More than 300 nuclear tests were conducted in the Pacific Ocean. Atolls in the Marshall Islands, Johnston Island, Christmas Island and French Polynesia were used as nuclear test sites, casting long shadows into the present.

On one low-lying Pacific island atoll, the toxic legacy of the nuclear tests remains. In 2017, Mark Willacy from the Australian Broadcasting Corporation investigated the nuclear-waste storage facility on the remote atoll of Enewetak in the Marshall Islands. It was there that the US conducted its series of tests of nuclear weapons, including the first full-scale hydrogen bomb. Before it abandoned its nuclear testing program in the 1970s, the US buried contaminated material on Runit Island.

An estimated 85,000 cubic metres of radioactive waste is buried on Runit Island, including some of the world’s most toxic materials. It will take more than 24,000 years for the waste to disintegrate. It’s buried in porous coral and sand and capped by a concrete dome. Marshallese and international non-government organisations are concerned that sea-level rise and major typhoons will destroy the dome, resulting in the contamination of not only the Marshall Islands but the wider Pacific Ocean. Since the sea is a free-flowing matrix of currents and borderless movements of water, a Pacific-wide disaster is a plausible scenario.

To provide some context for the potential impact of a radioactive spill on the livelihoods of Pacific islanders, consider the effect it would have on the fisheries sector, which is worth about US$3 billion annually to island economies. In around 2006, the Secretariat of the Pacific Community initiated a project that involved catching, tagging and releasing tuna to monitor the migratory patterns of tuna stocks and their sustainable harvesting. The studyshowed that skipjack tuna tagged and released in the Bismarck Sea in PNG migrate beyond it into the EEZ of the Marshall Islands.

Data from the tracking of tuna demonstrates the interconnections of marine resources through the oceanic environment. Contamination of the fisheries resources of the Pacific islands from the leaking of radioactive materials into the ocean should be a compelling reason for a regional response. The problem with nuclear-waste sites on islands such as Runit is not a domestic one for the Marshall Islands alone. Countries such as PNG are in the vicinity of the major fisheries food chain, and the health of the ocean is of paramount importance to long-term food security and the wealth to be gained from marine-based commodities. To focus attention on the problem and initiate a regional clean-up effort, states in the Pacific islands need to apply pressure through multilateral platforms and collective diplomacy.

The Pacific island states have an illustrious record in employing collective diplomacy to tackle difficult issues. Since the 1980s, the high-water marks of collective diplomacy have been the UN Convention on the Law of the Sea in 1982, the 1985 Rarotonga Treaty and the global moratorium on drift-net fishing. Currently, small states in the Pacific islands are actively engaged in framing the narrative on global cooperation to deal with climate change challenges.

The Blue Pacific is a timely framework, emphasising a Pacific islands worldview, and is an alternative to the zero-sum confrontations of big powers in the region. More importantly, it stresses the importance of cooperation on Pacific terms in dealing with transnational challenges. The various major powers embroiled in their great-power confrontations in the Pacific ought to be educated about the significance of the Blue Pacific and their participation in advancing the goals of that paradigm. After all, the Pacific Ocean connects all the large landmasses on the Pacific Rim. The state of affairs in the islands is a microcosm of the planet’s chances of surviving global environmental challenges.

This article by Patrick Kaiku first appeared in the Australian Strategic Policy Insitute’s The Strategist in 2019.

Patrick Kaiku is a teaching fellow in the political science department at the University of Papua New Guinea.