How The Trump Administration Plans to Save the U.S. Economy from the Coronavirus 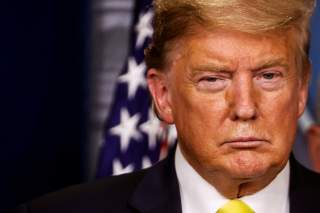 As of Tuesday afternoon, 802 Americans have tested positive for the coronavirus, and twenty-seven patients have died from it. While cases are located nationwide, they’re predominantly in coastal cities, including New York City, Washington DC, San Francisco, and Seattle. The growth of the contagion, with over one hundred new cases announced daily since Saturday, is beginning to compel people to self-quarantine and avoid public spaces.

President Donald Trump is sticking to the same line that he has held for weeks, encouraging the public to avoid a crisis mentality and go about their daily business. If people “stay calm,” then the coronavirus “will go away,” Trump said today on Capitol Hill. “It’s really working out, and a lot of good things are going to happen.”

Despite the overt assurances, the administration is now beginning to look at state-based solutions to provide relief to businesses and individuals who have been affected by the coronavirus while simultaneously keeping the economy humming.

“We will be taking care of the American public,” Trump said, taking the stance that those being quarantined should not be “penalized for something that is not their fault.”

“I think there is an appetite . . . obviously to do whatever we can to help mitigate the economic impact of the virus,” said Senate Majority Whip John Thune (R-S.D.).

The proposal being pushed by Trump is a payroll tax cut with a “big number.” This sort of large proposal was immediately rejected by Democrats and dismissed by more skeptical Senate Republicans. According to the New York Times, Senate Majority Leader Mitch McConnell (R-Ky) Kentucky, along with colleagues John Cornyn (R-Texas) and Chuck Grassley (R-Iowa), do not believe a major stimulus package is necessary or prudent at this time.

Some of the proposals being mentioned by Democrats include an expansion of the food stamp program to assist low-income families. With the specter of public-school closings in the coming weeks, children in poverty are likely to miss meals that normally would be provided by the state. The other tactic getting play are price controls or “anti-gouging” measures. These would restrict prices on in-demand items and possibly medical solutions like vaccines. A direct result of price controls are shortages and increased scarcity.

With multiple members of congress self-quarantined in their home states and an outbreak in the Washington DC area, there has been chatter of congress holding a two-week recess. House Speaker Nancy Pelosi (D-Calif.) has denied that this is necessary and believes appropriate action can be taken within the next week. Other members, particularly those in swing districts, agreed, refusing to leave the Capitol until the legislature passed a measure.