How to Turbocharge NATO: America and Europe Should Build a New Fighter Jet Together 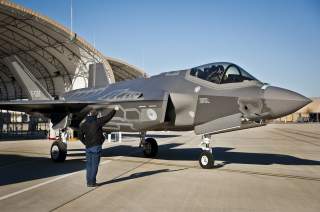 With a resurgent Russian threat in the East, European members of the NATO alliance seem to finally be taking the problem seriously.

In recent days—just ahead of an alliance summit in Brussels—German Chancellor Angela Merkel said in a video statement that NATO must “focus more on defending the alliance.”

Merkel added: “To do that we [must] make necessary arrangements, for example through a presence in Central and Eastern European countries.”

But Merkel is not the only European leader to suggest that the alliance will start to take the uneven burden sharing between the United States and its European allies more seriously as U.S. President Donald Trump demands.

“We estimate that European Allies and Canada will add an extra 266 billion US dollars to defense between now and 2024.”

The allies are also promising to step up the readiness of their forces, which has been another point of contention between Washington and Europe.

“This is a commitment to have by 2020: 30 mechanized battalions; 30 air squadrons; and 30 combat vessels, ready to use within 30 days or less,” Stoltenberg said.

However, NATO members have made similar promises before—it was reiterated at the 2014 Wales Summit—and have only reluctantly increased their defense outlays.

Indeed, despite Merkel’s statements, Germany will not reach the two percent of GDP spending target by the 2024 deadline. Nor does Berlin have any firm plans to do so. Instead, German defense minister Ursula von der Leyen said Berlin would only commit to bringing up German military spending to 1.5 percent of GDP by 2024 rather than meet the deadline.

Chances are that European alliance members will continue to shirk burden-sharing responsibilities between the United States and the rest of NATO ad infinitum. The United States has been grumbling about the uneven burden sharing between Washington and Europe since at least the 2006 NATO summit in Riga and indeed even before then.

That debate became even more intense after the Russian invasion of Ukraine in 2014. However, even though Russia most directly threatens Europe and not the United States itself, the alliance has dragged its feet on increasing defense spending. Only about half of NATO members intend to meet the 2024 deadline.

However, if NATO alliance members cannot or will not meet their spending commitments, perhaps those European nations could try to get the most bang for their buck by procuring their defense hardware more efficiently.

For example, European members of the alliance might consider not developing redundant programs such as multiple sixth-generation fighter efforts. Right now, there appears to be at least two such projects underway—a Franco-German effort and a separate British-Swedish effort.

Some European defense industry officials recognize that alliance members should pool their resources.

“I strongly believe it has to be a full European solution [for a new combat air program]. Two or more different solutions is not sustainable, it will bring Europe into the second league,” Dirk Hoke, Airbus Defence and Space chief executive officer, told reporters at a pre-Farnborough air show briefing in London July 6 as reported by Defense News’ Andrew Chuter.

While European countries might be tempted to pursue multiple projects across the continent to maximize their industrial share, it would be a fruitless effort as Hoke noted. That is especially true when even the United States is having difficulty pursuing the development of its next-generation fighter aircraft.

“TTO [Tactical Technology Office] seeks undeterrable air presence in any environment and theater, from permissive to highly contested, at a time of our choosing,” reads a solicitation from the Defense Advanced Research Projects Agency.

“Our acquisition system is finding it difficult to respond on relevant timescales to adversary progress, which has made the search for next- generation capabilities at once more urgent and more futile. More fundamentally, platform stealth may be approaching physical limits.”

Indeed, it might be better for the alliance if European NATO members pooled their resources with the United States to develop a follow-on fighter aircraft. While Europe would not necessarily accrue the same level of industrial benefits as a solely European project, the resultant aircraft would likely be superior overall by combining the best of European and American technologies.

And while the Lockheed Martin F-35 Joint Strike Fighter might not have been an ideal model for such a program, the lessons from that gargantuan $400 billion effort could be leverage for such a combined effort. Properly executed, it could potentially save both Europe and Washington money. It would be a form of burden sharing—one could argue.