How the United States Can Help Ukraine Cripple Russia's Blockade 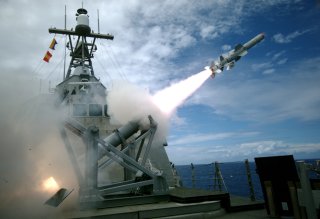 Earlier in the Russo-Ukrainian War, Russia conducted an amphibious assault from the Black Sea into southern Ukraine. While there have not been any similar attacks since then, there is still great concern about Russian firepower from the ocean.

Russian warships have been conducting a blockade in the Black Sea, slowing down or stopping Ukraine’s critically needed grain supply and placing coastal areas at great risk of bombardment. In response, NATO allies and the United States are now sending Harpoon anti-ship missiles and launchers to strengthen Ukraine’s coastal defenses.

“Allies are providing Harpoon launchers and missiles to bolster Ukraine's coastal defense, and the U.K. is providing M270 multiple launch rocket systems and training to help Ukraine defend its territory in the Donbas,” Defense Secretary Lloyd Austin said at a meeting of the Ukraine Defense Contact Group at NATO headquarters in Brussels, Belgium.

Ukraine has had some success firing Neptune land-based missiles at Russian warships, however, it is unclear just how many they may have and what targeting systems they use.

Multiple Launch Rocket Systems (MLRS), which the Ukrainians are also receiving, could be fired from coastal areas at Russian warships in the Black Sea, making the Russian Navy vulnerable to land attack. This is extremely significant, as it might offer Ukraine an opportunity to open up a maritime corridor for supply routes or incoming weapons.

Ukrainian forces have also been receiving surface drones, or unmanned surface vessels, which can serve as reconnaissance nodes for ground-based missile launches. Unmanned systems can closely approach Russian warships without placing human fighters at risk, and they can be networked with datalinks to send back targeting specifics, coordinate coastal attacks, or identify vulnerable points within the Russian force.

The success of coastal defenses would likely depend heavily on the kinds of guidance systems the weapons used. For example, if ground-launched cruise missiles could be GPS-guided or perhaps follow a “laser spot” painted on a Russian ship by a forward drone, then Russian warships would instantly become much more vulnerable. Maybe the challenge for Ukraine is inventory. Perhaps they do not have an arsenal sizeable enough to consistently attack Russian ships?  However, precision guidance technology and large numbers of ground-fired rockets could truly threaten Russian ships, should they be in Ukraine’s possession. The United States, for instance, could help train the Ukrainians with multi-domain operations, as the U.S. Army has been testing and assessing its precision ground weapons against maritime targets. Newer guidance technology, perhaps similar to the seekers and targeting innovations now being explored for the Army’s Precision Strike Missile, could enable Ukrainian coastal defenses to target moving Russian warships, crippling their ability to conduct a blockade or attack the coastline.

Kris Osborn is the Defense Editor for the National Interest. Osborn previously served at the Pentagon as a Highly Qualified Expert with the Office of the Assistant Secretary of the Army—Acquisition, Logistics & Technology. Osborn has also worked as an anchor and on-air military specialist at national TV networks. He has appeared as a guest military expert on Fox News, MSNBC, The Military Channel, and The History Channel. He also has a Master's Degree in Comparative Literature from Columbia University.
Image: DVIDS.