How the U.S. Army Is Redefining the Main Battle Tank 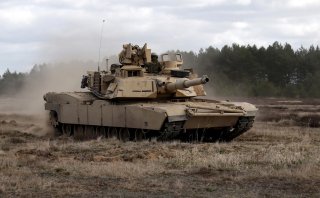 A new sixty-ton, fuel-efficient, hybrid-electric main battle tank—armed with next-generation ammunition and an unmanned turret—has blasted onto the scene as a “demonstrator” offering for the U.S. Army. The AbramsX, recently unveiled by General Dynamics Land Systems (GDLS) at the Association of the U.S. Army Annual Symposium, arrives just as the Army surges forward with analysis regarding the future of heavy armor.

The emergence of the new GDLS Abrams variant aligns closely with ongoing Army analysis and experimentation on how best to adapt technology, unmanned systems, maneuver formations, and highly survivable heavy mechanized platforms to a new threat environment. While there are still many questions, one clear thing is clear: the Army welcomes innovation.

“It's too early to say what the future of the Army's battle tank is going to be. What I can tell you is that … we are looking down the road—what are the investments that we need to make, what is currently the art of the possible? And I think, as [Army Futures Command] continues to do experimentation through the Next Generation Combat Vehicle [cross-functional team], we will begin to extract some lessons learned,” Under Secretary of the Army Gabe Camarillo told the National Interest in an interview.

While the Army is often careful not to take a specific position on particular industry offerings like the AbramsX, the service is intensely committed to the kinds of innovation presented by the AbramsX.