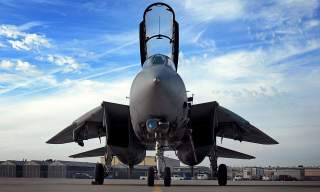 A 46-year-old video reveals the impressive aerial display that apparently helped to convince the shah Iran to buy Grumman-made F-14 Tomcat fighters from the United States back in July 1973.

The video, which Facebook user Fulcrum Pilot posted on Sept. 26, 2019, depicts an early-model F-14A performing a short takeoff and landing, a low-speed pass and a high-g turn over Andrews Air Force Base in Maryland as Iranian king Mohammad Reza Shah Pahlavi watches.

The shah was in Maryland to choose between the F-14 and the McDonnell Douglas F-15 Eagle in order to build up the Iranian air force. Both of the twin-engine fighters flew over Andrews that day.

“The flight demonstration was scheduled not to exceed 30 minutes from the first take off to the landing of the second aircraft,” Dario Leone explained at The Aviationist.

The base was closed for that short time in which at the presence of the shah, the two U.S. fighters had to fly their demonstration. It was decided that the U.S. Air Force’s F-15, piloted by Irv Burrows (McDonnell Douglas’ test pilot), would perform first, while Don Evans and Dennis Romano (Grumman’s test crew) with their F-14 would wait their turn after the Eagle.

While the F-15 taxied onto runway, Don and Dennis started engines of the Tomcat ahead of the schedule and burned down fuel in the warm-up area during the Eagle demonstration, to reduce the difference in thrust-to-weight ratio between the two fighters. However F-15’s demonstration was spectacular, not only for the raw power of the aircraft but also for pilot’s skills. Burrows was a great pilot and that day, he showed all his ability.

The flight plan was the same for both planes, Leone wrote. “A sequence of maneuvers beginning with a high performance take off followed by an Immelman turn and climb-out then a descent to a high-speed fly-by, two high-g low altitude turns followed by a slow speed fly-by in the landing configuration and last, the landing.”

Since the F-15 has a higher thrust to weight ratio than the F-14A, the Eagle performed a really impressive flight profile during which it pulled an incredible seven-g, 360-degree turn.

After the F-15 had finished its display, everyone was waiting for the underpowered F-14A demonstration. The Tomcat’s TF-30 engines would not give to the aircraft the same thrust-to-weight ratio as the Eagle.

However, during the F-15’s performance, Evans and Romano burned down a great quantity of fuel and now they had only 2,500 pounds of remaining gas. While this little quantity was only sufficient to accomplish their flight demonstration, 2,500 pounds was also one eighth of the Tomcat’s internal fuel capacity and thanks to this fact the Tomcat had the same thrust-to-weight ratio as the Eagle.

At this point the F-14 had one thing that the F-15 didn’t have. Variable-geometry wings that would make the difference for the grace of the flight demonstration.

Don and Dennis pushed both throttles to full zone-five afterburner -- the maximum thrust setting for the TF-30. “The Tomcat’s crew, during the knife-edge pass, decided to sweep the wings from fully swept to fully forward and then they executed a turn at the maximum of the Tomcat’s performance [envelope], producing a large cloud of vapor off the wings due to the shock wave,” Leone wrote.

The shah was blown away. That’s how, starting in the mid-1970s, Iran became the only country besides the United States to operate arguably the most powerful interceptor jet ever built.

More than 40 years later, Islamic hardliners have taken over Iran and transformed the country into one of America’s worst enemies. But several dozen of the 79 F-14s Iran bought in the 1970s remain in service.

Through a combination of engineering ingenuity and audacious espionage, Iran has kept its F-14s in working order — and even has improved them. The swing-wing fighters have taken to the air in several conflicts and even occasionally have confronted American planes.