How the U.S. Marine Corps Is Gearing Up for Fast Fights in the Pacific 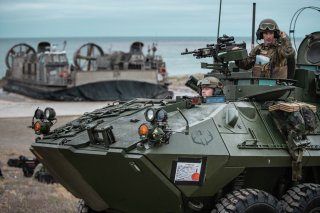 The Corps’ transformation shifts the force away from tanks, heavy armor, and slower-moving operations in favor of a faster, lighter, more disaggregated attack and reconnaissance force capable of destroying the enemy from both standoff ranges and close combat.

As Marine Corps Commandant Gen. David Berger wrote in the Force Design 2030 document, “The Marine Corps must be able to fight at sea, from the sea, and from the land to the sea; operate and persist within range of adversary long-range fires; maneuver across the seaward and landward portions of complex littorals; and sense, shoot, and sustain while combining the physical and information domains to achieve desired outcomes.”

Faster and more dispersed forces, fortified by precision fires and hardened networking, can operate with a reduced footprint or signature, which makes them harder to detect and requires less logistical support.

By implementing Force Design 2030, the Marines hope to “focus on capabilities required to develop a truly DO-capable force that can mass effects while minimizing signature; maximize efficient tactical mobility; reduce logistics demand; and expand the range of mutual support across all tactical echelons.”

The plan specifies a large degree of force restructuring, including large-scale divestiture of infantry, artillery, tanks, and other heavy systems, while adding drones, reconnaissance vehicles, and long-range precision fires to support a lean and networked force.

On the other side of the equation, the Corps is planning to massively increase its long-range fires technology and forward expeditionary scouting capacity by adding fourteen rocket artillery batteries and three companies of Vehicle companies, bringing the force up to twelve companies in total. These moves are consistent with the Corps’ interest in enabling a distributed and networked force able to both attack from stand-off ranges and maneuver close-in with high-speed scouting and forward reconnaissance vehicles.

As part of the armored formation transformation, the Corps is arming faster, more mobile tactical vehicles, such as its Joint Light Tactical Vehicle (JLTV), with anti-armor weapons. The aim is to enable tank-like lethality without the logistics and mobility challenges that come with tanks. To accomplish this, the Corps plans to arm JLTVs with Multi-Canister Launchers capable of firing anti-tank weapons like the Javelin. Should forward units be deployable and more mobile but still capable of delivering impactful anti-armor lethality, the Corps will grow closer to its longer-term objectives. This concept is intended to align with the Navy’s Distributed Maritime Operations strategy, which is designed to reduce force vulnerability through the use of networked and disaggregated forces capable of leveraging long-range sensors and weapons.

As the Marine Corps’ strategy document notes, “Achieving this end state requires a force that can create the virtues of mass without the vulnerabilities of concentration, thanks to mobile and low-signature sensors and weapons.”