How the U.S. Military Slowly Fell in Love with Glock 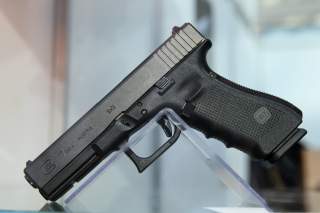 While the Glock pistol has long been a favorite of American police departments, taking up to 75 percent of the police handgun market, by some figures, it has seen far less use in the U.S. military. While Glocks are now used by almost every elite unit in the military, it wasn’t like that for most of the 1990s and 2000s.

So why was adoption of the Glock initially slow? How did it overcome those barriers? Why has it replaced 1911s, Sigs and Berettas as the sidearm of elite units?

Despite being designed for an Austrian military contract, the first official adopters of the Glock in the United States were police agencies. While guns were acquired by the Department of Defense and other national entities for tests, the Glock was not adopted by the U.S. military.

The most likely reason for the military’s reluctance to adopt the Glock in the late 1980s was that the U.S. military already transitioned to a 9mm semiautomatic pistol from the Colt 1911 a few years before. Starting in the 1970s, the U.S. military attempted to consolidate its inventory of handguns (over twenty were used before then) in the Joint Service Small Arms Program (JSSAP).

JSSAP’s first run of testing occurred in 1977, before the Glock existed. The trials were won by the Beretta 92 but results were inconclusive. The program was restarted under army management as the XM9 handgun program.

The Glock was invited to compete during the XM9 trials in 1983, but the company was just tooling up for its Austrian Army contract and thus could not provide the requisite amount of testing pistols nor material support. The Beretta 92 won again and was adopted as the M9.

However, due to some hiccups with the Beretta in testing, the M9 gained a poor reputation with special units. Notably, a slide cracked and hit a SEAL whom was testing the pistol in the face, resulting in minor injuries.

The Navy SEALs would go onto adopt the Sig Sauer P226, one of Beretta’s competitors in the XM9 program as a general carry pistol. The SEALs also adopted H&K’s P9S, a competitor in the original JSSAP program, as a suppressed pistol, due to the fixed barrel and unique roller-delayed operation which allows it to function underwater.

Marine Force Reconnaissance continued to use 1911s as well as the M9 in the pre 9/11 era. In an article detailing the equipment of Force Recon, Marines didn’t express much confidence in the M9 while touting the qualities of their custom-built M1911 pistols. Interestingly, they also retained WWII-era High Standard .22LR pistols for suppressed use.

Army special units used the M9s, as Army Special Forces were expected to use the same sidearms as the rest of the U.S. Army.

The military would only get its first Glocks in the post-9/11 era. According to Jeff Gurwitch, a  Special Forces soldier who was issued a Glock, the first unit in the U.S. military start using the Glock was a Tier 1 unit commonly known as Delta Force, which began using the .40 caliber full size Glock 22 sometime around 2003 or 2004.

The reason given was that the maintenance of custom 1911s used by the unit was getting too expensive, with the constant rebuilds and increased strain of new methods of training, which involved much more shooting. Shooters also wanted more rounds in the gun, so a double stack 1911 (STI 2011)  and the Glock 22 were competitively evaluated, and the Glock won. The Glock also is said to run better in desert environments compared to the 1911s.

The adoption of the Glock by this unit caused a general move in all of the Special Operations community towards the Glock. Following their lead, air force units moved to the Glock shortly after.

In Gurwitch’s account, regular Army Special Forces managed to acquire Glock 19s around 2006 through a loophole as they were considered a “compact” gun as opposed to the “full-size” M9s issued by the army.

While the logic was that these compact guns would be used for concealed work, soldiers outfitted their guns with full-size magazines and other accessories to make the guns bigger for use as a general carry pistol. While theoretically the full-size Glock 17 or 22 would be better for this role, army bureaucracy prevented their acquisition. For work that really involved concealment, Army Special Forces bought the subcompact Glock 26.

Glock 19s were also being bought in bulk by the United States to arm Iraqi police around the same period, so positive experience with these pistols may have further driven the desire to adopt the Glock.

From that point on, Glocks continued to proliferate in the military. Rangers soon also started using the Glock 19 after Army Special Forces.

In 2015, the floodgates opened and Army Special Forces dropped all pretense of using the M9 and bought enough Glock 19s to issue to every soldier in the command. The same year, the Navy SEALs also adopted the Glock 19.

Marine Special Operations Command would follow a year later, selecting Glock 19s for their elite Raider unit to replace the M45A1 CQBP, a new production-built 1911 that replaced their earlier custom 1911s. Sometime between all of these events, Delta also transitioned to the Glock 9mms from their earlier Glock 22, supposedly due to excessive wear from .40 caliber.

So why is the Glock so popular with these units? It’s likely the same qualities that made it a favorite with police departments in the United States.

Glocks tend to be lighter, making them easier to carry. They are faster and easier to train on. Double action/single action triggers found on the M9 and Sig P226, while having a crisp single-action pulls, require significant amounts of training to get accuracy with the first double-action shot. Glocks also are incredibly reliable (more so than 1911s) and easy to service in the field due to their modular design.

There’s also potentially a demographic component to the move to Glocks. Glocks are the most common pistol on the U.S. civilian market, and servicemembers in the military today probably grew up shooting Glocks, not 1911s or DA/SA pistols. Gurwitch suggests that a lot of the desire for Glocks in the Special Operations community comes from operators wanting what they’re familiar with from civilian shooting.

While Glocks will not become the standard-issue sidearm of the U.S. military after being beaten by the Sig P320/M17 in the XM17 handgun trials, it’s unlikely that special units will be giving up their Glocks anytime soon.