How the U.S. Navy Could Arm Destroyers with Hypersonic Weapons 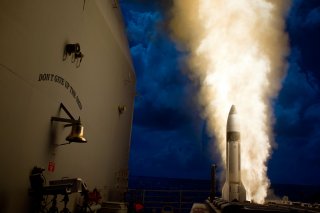 Hypersonic weapons could soon fire from U.S. Navy destroyers and take off at speeds five times the speed of sound from deck-mounted Vertical Launch Systems, fire from airborne bombers and shoot up from the ground near the boundaries of space.

One particular program now approaching this kind of tactical ability is a DARPA/Air Force program called the Tactical Boost Glide program, a weapon DARPA data explains consists of a rocket accelerating to high speed and then separating from the payload which then “glides unpowered to its destination.”

Lockheed Martin’s emerging Long-Range Hypersonic Weapon (LRHW) offers an example of a hypersonic boost-glide vehicle which is propelled up in to the air before relying upon its massive speed of descent to impact and destroy a target. The LRHW, which has now been revealed by Lockheed images, is engineered to travel 60-miles per minute up toward the outer layer of the earth’s atmosphere before gliding at hypersonic speeds to its target.

What would it mean for a Navy ship to have this kind of range and strategic attack envelope? Surely such a weapons system would change the tactical equation for maritime warfare as it would enable surface warships to destroy enemy land, sea and air targets operating at otherwise unreachable distances or traveling at speed quite difficult to track.

A high-speed hypersonic weapon could not only be used to destroy land targets such as fixed infrastructure  or force concentrations from safe standoff distances before an enemy can respond, but also possibly be used as a counter-air weapon able to hit fighter jets traveling themselves at speeds faster than the speed of sound. In this respect, an otherwise “hard to target” platform such as an enemy stealth fighter might be vulnerable to attack. This expands the operational scope of Navy ships and of course favors the possibility of successful disaggregated tactical attacks wherein approaching offensive platforms can network in a successful way and integrate coordinated strikes while safer from enemy fire.

Ship-launched hypersonic weapons could also support ballistic missile defense weapons such as an SM-3 or SM-6 by adding new dimensions to a protective envelope. Vertical Launch Systems might need to be reconfigured to incorporate new kinds of propulsion technology or rocket systems to fire off hypersonics at the needed speeds. Also, a hypersonics could bring a huge defensive advantage to Navy ships by working to intercept attacking enemy anti-ship missiles.