How the U.S. Navy's Third Fleet Is Taking Over the Indo-Pacific 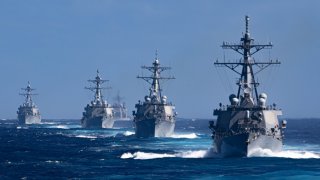 The United States Navy’s 3rd Fleet is gaining new responsibilities and expanding its role in the Indo-Pacific, prompted by the increasing threat posed by both Russia and China.

“Five, six years ago, 3rd Fleet was a headquarters that did mostly [certifications] and we played in exercises. Now, we are an actual operational headquarters that has a watch that’s currently stood up in Point Loma,” VADM Michael E. Boyle, Commander of the United States 3rd  Fleet, told USNI News.

“They are managing the space from the international dateline back to the coast. And so all the operations that are happening in there—if the Russians were to send submarines or ships, they would be tracking those from an intelligence standpoint, from posturing the force.”

“We also have been tasked to practice, be prepared to rehearse, be able to operate as a maritime operations center forward. So we have plans over the next couple of years to do expeditionary command and control, either from ships, or from Australia or the Philippines…you name it,” Vice Admiral Boyle said.

Though the United States and Australia have long been allies, Washington has taken steps in recent years to tighten the relationship with Canberra. In addition to last year’s AUKUS agreement, the United States regularly bases a contingent of U.S. Marines on Australia as well as significant air assets.

“If we needed to put a command and control facility forward, we might have to do that. And that might be because 7th Fleet’s busy doing something else and an earthquake happens over here and we need a task force to go down and command and control the effort,” Vice Admiral Boyle added.

“And so 3rd Fleet might be the perfect ones to do a Philippine disaster relief because Russia’s getting uppity. And so 7th Fleet’s focused on Russia and 3rd fleet does something else. Or we plug into the larger PACFLEET as half of his maneuver force.”

The United States is actively preparing itself—and its allies—for that war. One of the leading ways of preparing is via the Rim of the Pacific, a biannual naval exercise involving a number of Pacific nations. Though exercise has been conducted since the 1970s, it has taken new importance in recent years, given the threat posed by China to the Indo-Pacific region.