How to Use Your AR-15 or Glock in the Snow 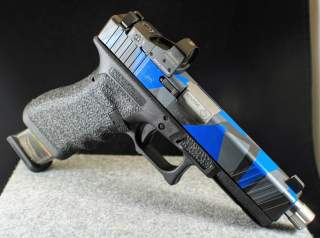 It gets cold during the winter, and understandably, the conditions may deter you from going outside to shoot.

But here’s the truth: just because it’s the winter time with frigid temperatures and lots of snow outside does not mean you shouldn’t be out shooting. If anything, you should go shooting during the winter months to help become accustomed to the conditions. There are different considerations that you will need to take into account for winter shooting. After all, you may need to defend yourself during the winter, and it’s important to keep your skills honed.

Beyond actual shooting considerations, there are also provisions needed to care for your firearms during the winter as well, and we’re going to talk about those in this article.

Here are the top winter shooting tips and considerations to take into account for this year:

The first tip is without question the most obvious, but it is still worth discussing: dress appropriately for the weather. Besides dressing warmly, you may also want to invest in shooting gloves, which can keep your hands warm from the frigid air while also being flexible enough to enable you to still fire and operate your firearm.

Whenever you step outside into the frigid cold air, and your body’s temperature begins to fall, your brain will take action to try and keep your internal organs warm. To accomplish this, it will send nerve impulses to your nervous system, signaling that the body needs to prevent hypothermia.

The physical result of this is that you will shiver, and shivering will result in more of your blood flow being circulated to your internal organs to help keep them warm…and away from your fingers and toes (this is why your fingers and toes are the most vulnerable regions of your body to frostbite), and it’s why wearing gloves while shooting will be particularly important (cold fingers can throw off accuracy).

You also may want to invest in a quality pair of heat holding socks.

Dry Your Firearms After Use

Guns rust, and that’s a simple fact. But they only rust when they are exposed to moisture. The problem, of course, is that there plenty of moisture to go around during the winter time.

If snow were to get on your rifle while you’re out hunting, it will melt down into water. If you don’t dry it off afterwards, chances are good that rust will develop. And of course, the same goes for virtually any scenario where you’re using your guns out in the snow (not just hunting).

Plain and simple, plan on drying off your firearms after bringing them indoors following a shooting session outside in the winter. But drying them may not be enough to truly prevent rusting, and that’s why you’ll want to…

It’s equally as important to keep firearms maintenance during the winter as it is outside of the winter. However, you will want to be just a bit more strategic about it.

A major problem exists with rusting during the winter: warm air can condense on the cold metal of your firearms, which will lead to a quick coating of rust over the surface of the firearm.

This means that even if snow or water does not get on your gun when you have it outside during the winter, when you bring it back inside to warmer temperatures it can still rust and corrode anyway, which means that just drying off your guns when you bring them back indoors may not be enough.

Instead, make it a habit to always lubricate your firearms after you bring them indoors after a winter shooting session.

However, do not lubricate them when you are outdoors in the cold, because the oil can literally freeze to the firearm. RemOil or Hoppe’s No 9 would work well. For extreme conditions, I recommend Slip 2000 EWL.

Wrap Your AR-15 Barrel In Cloth

Do you own an AR-15 or want to buy one? If so, here’s a quick tip that you will want to listen closely to:

AR-15 rifles usually have a bare metal front and aluminum free floating tubes. These are fast conductors of the cold (and this can negatively impact your accuracy), so to prevent that you can wrap them up in both or something else warm such as foam or wool or even burlap.

In other words, wrapping your Ar-15’s barrel in cloth during the winter can help make it more accurate (and also protect it from rust).

Scope fogging is something that you will inevitably have to deal with when shooting or handling firearms in sub-zero temperatures, assuming that you’re using scopes to begin with. The best way to mitigate this will be to invest in a quality scope cover, which will keep condensation off and out of your scope. Just make sure that the covers will fit snugly over your scope, or else they will not be as effective.

Besides covering up your scope, you may want to cover up your entire rifle as well. It will be important to keep your rifle as close to normal temperatures as possible, so you can help to keep it warmer and condensation out by covering it up with a snugly-fit rifle sleeve of some kind.

Ammunition has a finite shelf life, and this shelf life will be shortened significantly in the winter months if you are not careful. This is because cartridges will degrade internally if exposed to dramatic temperature shifts.

When you do bring ammunition outdoors though, it can become brittle during extended exposure to the freezing cold weather. You cannot undo this damage, and any ammunition that does become brittle should be safely disposed of.

This is why you should keep ammo as warm as possible when you exposure to cold outdoor temperatures. Keep it stored away in a range bag and keep the range bag fully zipped up to reserve as month warmth as you possibly can.

If you feel that ammunition has been exposed to cold temperatures for too long, it may be better to rotate it out later with other ammunition you have at home.

Cover The Muzzle With Electrical Tape During Hunting

While hunting, prevent debris or snow from getting into your hunting rifle and plugging up your barrel, you can cover the barrel of your rifle with electrical tape.

And guess what: you don’t need to remove the tape when you get ready to shoot, because the bullet will pass right through the tape without any issues. The tape will just blow right off when you discharge the firearm.

Whether you’re going target shooting or hunting during the winter, you’ll want to keep the above tips in mind.