This Is How The Uzi Became a Legendary Super Gun 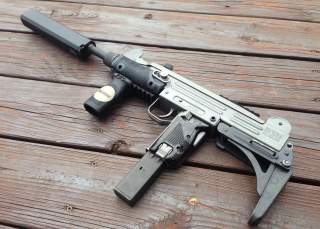 Key point: Submachine guns have come a long way since the Uzi.

The Uzi is a rare gun that has gained enough recognition to enter popular culture.

But unlike other guns that have made the distinction, like the Glock, AK, M-16, and MP5, the Uzi doesn’t have as stellar of a reputation among its users. Ask about the Uzi on any military forum, and stories of accidental discharges and terrible ergonomics will pop up. Yet the small SMG served on every continent and even in the hands of elite units like the United States Secret Service.

So why was the Uzi so popular?

Quite simply, it was the first widespread “modern” SMG for the Cold War era. Other SMGs in the immediate postwar era, like the MAT-49, Carl Gustav m/45, and Vigneron, were largely updated WWII designs that were still relatively large, bulky, and cumbersome.

The only true competitor was the Czechoslovak Sa vz. 48, which reached service in 1948. However, Warsaw Pact export policy prevented the vz. 48 from seeing worldwide use.

Compared to WWII-era designs, the Israeli Uzi was compact, lightweight, ergonomic, and cheap. Almost completely made of metal stampings, the gun was ridiculously fast and easy to manufacture. The IDF quickly adopted it and pressed it into service as a personal defense weapon for rear-echelon troops, and as a close combat weapon for elite infantry units like paratroopers and special forces.

The Uzi was also designed to be safer than earlier WWII SMGs. Many WWII SMGs would fire if the bolt was let forwards from a position far enough back to strip a round from the magazine. The Uzi incorporated a few features were meant to address this and other safety issues with open bolt guns. The safety/fire-selector, a switch-like mechanism, ergonomically placed near the shooter’s thumb, locked the bolt’s movement when placed on safe. The Uzi also featured a grip safety that would prevent the bolt from moving unless depressed. Finally, most military Uzis featured a ratcheting top cover that would prevent the bolt from going forwards accidentally if the cocking handle was let go halfway through the cocking process, similar to the “half cock” safety on many pistols.

While these worked on paper, evidently they were not that effective in the field. Reports of Uzis accidentally discharging are commonplace. South African Eland armored cars had Uzi mounts on the doors, and the Uzis would go off if the doors were slammed. German Bundeswehr motorcycle recon troops were issued the Uzi (under the designation MP2 or MP2A1), and the gun was known to go off if the rider took a bump too hard.

While official documentation of these incidents is scarce, a German news site mentions them as a criticism of the MP2 in German service. A soldier’s joke in the Bundeswehr is that the MP2 is the most effective hand grenade in the Bundeswehr inventory, as the gun would go off after being thrown into a room, presumably emptying the full 32 round magazine.

The Uzi was eventually replaced by more modern submachine guns like the MP5 that fired from the closed bolt, fully rectifying these safety issues. Closed bolt operation also improved accuracy. The Uzi itself would eventually be redesigned with a closed bolt in the Uzi Pro version, which is supposedly in use in special units in the IDF. Nowadays, practically every modern SMG design uses a closed bolt, from the Vityaz-SN popular with Russian Spetznaz to the B&T APC-9K just adopted by the U.S. Army.

The Uzi was popular because it was the best gun of its era: compact, cheap, and accurate enough. But by the 1980s, SMG technology had fully moved on, and the Uzi was left in the dust. But for a time, it was one of the best SMGs in the world.