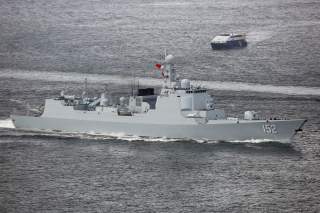 RADM Gaumon: There were a couple close calls we didn’t let get out to the press before Commander Hodges went down. A well-flown 35 is pretty hard to shoot at, let alone hit. There were a couple times we only realized they’d been trying to target one of ours when an NSA memo came in a day or two later on PLAAF chatter about some low observable target they’d tried to prosecute at such and such location. As time went on though they got better at getting vectors from the long wavelength radars to pilots and we started losing a few of our ROC flyers here and there and then Hodges got hit.

Honestly, I was surprised him going down didn’t do more. Those that already believed we needed to push back against the Chinese were further convinced. Those that bought the PRC’s line that this was an internal matter didn’t really change their minds after Hodges was shot down. The key was the posturing that followed the shootdown.

Moderator: You really think there was still a chance of peace until that point?

RADM Gaumon: You see the CCP had been feeding their people a narrative of Japanese and Western meddling and interference for a long time, the “century of humiliation” they called it. A lot of people don’t realize this but “losing” Taiwan to the Dutch and then to the Japanese is part of the same humiliation narrative as the opium wars and the Japanese invasion. So not only is Taiwan an ideological threat, you know, a genuinely Chinese democracy and all that, but it’s one of their last badges of shame. They couldn’t back down on Taiwan, they needed to win that one. As long as everything we did was plausibly deniable though, as long as they could still get Taiwan at the end of the day, they’d rather deal with our shenanigans than to push back and risk us getting involved in a proper war.

For our part, the fact we didn’t go to war when they first crossed the strait meant we were never going to and they should have recognized that. You can talk all you want about “cyberwar” and “greyzone conflict” and don’t get me wrong, those of us on the operational side stayed busy in those days, but no one who fought in the Westpac would confuse those things with real war. It was for the PRC and ROC, but not us, not yet. All we were doing was poking, prolonging the inevitable. The PLA would have taken the island eventually and we would have let them. Despite our best efforts and all our spectacular little successes, it was just a question of time as long as the U.S. stayed out. After they shot down an American pilot though, we couldn’t look weak. We had to do something, even if it was only moving a few ships and bombers around.

Moderator: If you’ll excuse me saying so, “a few ships and bombers” seems like something of an understatement.

RADM Gaumon: *Chuckles* I suppose it is. Believe it or not we really did try to calibrate it to be meaningful without being too threatening. Going from one carrier strike group to two, six new fighter squadrons around Japan, two bomber squadrons to Darwin and Guam, a few more patriot batteries here and there, in the grand scheme of things it wasn’t a huge increase in forces. Well, at least it didn’t seem so to us.

You know there’s a tough balance with situations like these. On the one hand the more you have forward, the more visible you are, the more vulnerable you are if or, in our case when, the other guy decides it’s time to go. On the other hand, you want to make things messy for the other guy, even if you can’t actually shoot at him. You also want to show your allies that you are there, and they can depend on you and that you’re in this together. In our case it was more a question of continuing the support we’d been providing so far but you shouldn’t underestimate what it meant to Taiwan that we were there at all. Sure, they were pissed at us for leaving them to fight it alone but after the first few days the fact that we were there, that we wanted to help even though we couldn’t do much, it kept a lot of people going.

We got the balance wrong though. We thought they knew we didn’t want to fight over this. There was no way we were going to stop making speeches at the U.N. and putting sanctions on the PRC for this massive, aggressive attack, but that was going to be it. Well, that and those of us over at TF 70 were going to continue making their lives hell for as long as we could. But they’d win. They’d fight through that mess they were getting themselves into in Taichung City, take Taipei, and then the great Chinese nation would be rejuvenated or whatever. They got their island back, their “China Dream,” and we got to show the world we didn’t do nothing. Everyone wins! Well, no one loses too much at least.

Moderator: So why didn’t that happen? Why did they attack?

RADM Gaumon: Someone woke up on the wrong side of the bed? I mean part of it was obviously political. Despite the best efforts of the PRC, the Chinese people were getting pissed, not just at Taiwan but at us for helping them. Say what you want about communism and Mao and the party and all that, China is a nation-state and the nation had its pride wounded. You have to understand this is the middle kingdom we’re talking about here, this is the center of the world, right? Not only had their lost province given them an embarrassing bloody nose but the Americans were helping them do it while having the audacity to deny any “military involvement.”

What pushed them over the edge though was the surge after Hodges. We had spent so much time talking about “A2/AD” and all the nasty new technologies that would expand the damn “bubble” that we forgot why they started doing this stuff in the first place. From the beginning it was always about stopping us from building the forces in-theater to win. Sure, we weren’t shooting at them yet but what about when we had the rest of our Air Force scattered across the First Island Chain? What about when two carriers turned into five? Taiwan had eaten up so much of the PLA’s resources they were simply too stretched out, too vulnerable to do anything else.

Their army was consumed by the absolute slog that was Taichung City, their air force still hadn’t really knocked out the ROCAF thanks to us, and a few lucky missile shots into the strait meant they were struggling to ship over enough to keep their forces in the southern half of the island fighting, let alone bring over anyone new. Think about what happened when our subs actually did start sinking things in the strait. What if they’d been supported by functioning air bases at Okinawa, by two, three carriers in the Philippine Sea? China was more stretched out, more vulnerable than it had been in decades and it didn’t take much to push them over the edge. They were scared and saw what they were afraid to see.

We never thought what we were bringing in would be enough to win a war and it wasn’t. The Chinese though, to them it looked like it might be enough to push them off Taiwan or worse, especially if we could get in one solid first strike. And after that? They saw how busy Norfolk and Bremerton and San Diego and Pearl had gotten. They noticed when large parts of 6th and 5th Fleets started pulling off station and heading east. We knew we were just being careful, but you think they were ever going to believe that? They just had too much they didn’t know, too much they couldn’t control, and it seemed to be getting worse every day. They decided to take the initiative back.

Moderator: And that was that?

RADM Gaumon: And that was that…

Moderator: The Stennis, the Roosevelt…

RADM Gaumon: And most of their escorts, and the Blue Ridge, and the Tripoli, and the Bataan, and the New Orleans, and too many sailors and marines to name. *Pauses* There are no words for a day like that.

Moderator: What was your immediate reaction?