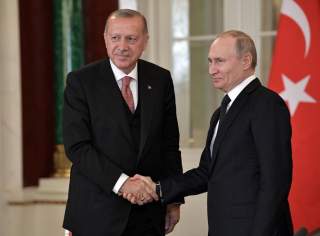 In the competition to sell arms around the world, the United States and Russia are on a collision course. And in this battle, the former happens to have a trick up its sleeve: the Countering America's Adversaries Through Sanctions Act (CAATSA), a law that gives Washington the ability to impose punitive measures on countries that purchase weaponry from Moscow and, in theory, tilt the playing field in its favor. In the year to come, however, the CAATSA threat might not land the United States all the arms business it is expecting; indeed, in chafing at America's heavy-handed approach, plenty of middle powers could spurn Washington in favor of other suppliers — or even Russia itself.

When Donald Trump took over as U.S. president in 2017, he ushered in a significant shift in the United States' arms exports. While past administrations had typically taken into consideration the interests of the U.S. defense industry when formulating foreign policy, the Trump administration has put the sector at the forefront of its approach. A few months into Trump's presidency, the United States approved a multibillion-dollar sale of F-16 fighter jets to Bahrain by dropping the previous human rights conditions that had slowed down the deal. The White House subsequently proceeded with several other big arms sales to Saudi Arabia, overriding not only restrictions imposed by the Obama administration on certain weapons but also pushing past Congress by declaring a national emergency after lawmakers blocked arms sales to Riyadh over the murder of Jamal Khashoggi.

The Trump administration formulated the strategy behind these recent controversial arms sales, and others like them, in an early 2018 "Buy American" plan that sought to boost the U.S. arms industry and the wider economy by maximizing the number of successful arms contracts. The initiative also pressed U.S. military attaches and State Department officials to adopt a sales role in peddling U.S. military gear around the world. Similarly, the United States has also moved to remove restrictions on the sale of certain weapons, such as armed drones, that had previously driven potential customers toward other sellers like China. The heavy focus on arms exports has paid off in terms of sales: Arms exports went from a respective $33.6 billion and $42 billion in the 2016 and 2017 fiscal years to a respective $55.6 billion and $55.4 billion for the 2018 and 2019 fiscal years.

But the United States is not the only country seeking to greatly expand its arms exports. Russia, the planet's second-biggest arms exporter, is increasingly doubling down on its familiar strategy of promoting arms exports as a means to maintain the health of its domestic arms industry at a time when orders for its own military are facing significant challenges due to its struggling economy. In this effort, Moscow has leveraged its military involvement in Syria to publicly highlight its equipment's capabilities, sought to link arms sales to its relationship-building strategies and demonstrated a willingness to sell its best and latest equipment to secure deals.

With both the United States and Russia attempting to secure key arms deals, potential clients often find themselves caught in the middle. This dynamic has manifested itself globally, although it is in the Middle East that the effects of this competition have most come to the fore, particularly with the threat of CAATSA sanctions.

While the United States did not develop CAATSA for the express purpose of promoting American arms exports over Russian ones, it has emerged as a key tool for the Trump administration in that regard. Under CAATSA, the United States has threatened to sanction countries that do not meaningfully reduce their arms imports from Russia. Washington has since raised the specter of CAATSA sanctions in talks with critical countries that remain dependent on Russia arms, including India and Indonesia in the Indo-Pacific, Egypt and Turkey in the Middle East and Serbia in Europe, among others.

Given the United States' sheer economic heft, this is no idle threat; indeed, Russia has long labeled CAATSA as a tool of unfair competition. The act, however, is in many ways a double-edged sword — something that has not escaped key Pentagon and State Department officials who have advised caution in its implementation. First, countries are particularly sensitive about foreign powers telling them whom to choose to fill their defense needs, especially as the degree of political interference, or lack thereof, is a key facet in any purchase. Understandably, then, such cajoling destroys trust between potential customers and Washington.

Second, many countries, such as India and Vietnam, have a major preexisting arms import relationship with Moscow, making it exceedingly difficult for them to substantially cut purchases quickly, especially as their forces are already familiar with Russian equipment. For many countries, for instance, there is no competitive alternative to the equipment they buy from Russia (in some cases, even from the United States), as other suppliers cannot offer the same product at the same price point or with the same level of technology transfer. Finally, by pressing its partners, some of whom already buy heavily from the United States, Washington could end up driving them toward alternative sources, including Europe, China or even their own domestic manufacturers.

All these variables raise the risk that CAATSA sanctions could backfire, driving the targeted country further away from the United States toward Russia or an alternative competitor like China. Turkey is a key case in point, as the country's decade-old tender for the purchase of air defense systems has snowballed into a major irritant between Washington and Ankara, two ostensible NATO allies. Russia, for instance, enticed Turkey to buy its S-400 missile defense system with offers of significant technology transfer, a favorable price and the prospect of closer relations. But the United States, especially Congress, has sought to strike back, denying F-35 fighters to Turkey and threatening CAATSA sanctions as punishment.

Spats in the Middle East

Instead of bowing to U.S. demands, Turkey thus far has threatened to move even closer to Russia, exploring the purchase of Russian Su-35 fighter jets as an alternative to the F-35 fighters whose transfer the United States is blocking. Recognizing this possibility — and fearing the loss of a major arms contract with Turkey — the Trump administration has sought to delay the imposition of CAATSA sanctions as it continues to seek a breakthrough with Ankara. But with Turkey digging in its heels on the S-400 purchase as Congress ratchets up the pressure, it seems all but inevitable the White House will end up imposing CAATSA sanctions on Ankara. Ultimately, the spat shows how the issue of arms sales, alongside other U.S. quibbles with Turkey, can have a remarkable impact on relations among three critical powers in a remarkably short time.

CAATSA's intersection with the U.S.-Russian competition for arms market share is also playing out in other countries in the Middle East. Russia's advanced weaponry features prominently in Moscow's diplomatic offensive in the Gulf Cooperation Council area, prompting some key Gulf states, like Saudi Arabia and Qatar, to voice interest in such arms. Moscow has also capitalized on its improved relationship with Cairo to seal several arms deals, including a recent contract for Su-35 fighter jets.

Russian success in what are traditionally close U.S. allies could, theoretically, pose a grave challenge to a key U.S. market, but it is unlikely that Moscow will make much headway in displacing Washington given these countries' dependence on the United States as their primary security guarantor, vulnerability to U.S. sanctions and craving for advanced U.S. equipment. Because of this dependence, in fact, the United States is likely to be more successful in using the CAATSA threat to shape such countries' behavior than with other states. It is little surprise, then, that the United States has quickly moved to threaten CAATSA sanctions against Egypt if it proceeds with its purchase of Russian weaponry.

Washington and Moscow will continue to battle for market share as both prioritize arms sales. This competition, however, is assuming ever-higher stakes, especially as the United States is now willing to brandish sanctions as part of the battle. Adopting such a zero-sum approach could help the United States keep countries, especially those highly dependent on it, from pursuing arms from Russia. But as the case of Turkey highlights, playing hardball could also drive the countries in question even further into Moscow's arms. And with the United States likely to lean on traditional Russian arms customers like India to "buy American" in 2020, it's an approach that's likely to ruffle some feathers with major international players in the year ahead.

How Washington's CAATSA Threat Could Backfire is republished with the permission of Stratfor Worldview, a geopolitical intelligence and advisory firm.