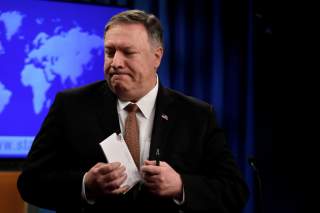 The decision by the Trump administration to designate Iran’s Islamic Revolutionary Guard Corps (IRGC) as a foreign terrorist organization marks another dangerous step in the relentless campaign Secretary of State Mike Pompeo and National Security Advisor John Bolton are waging to provoke a U.S.-Iranian military conflict and topple the regime in Tehran. Their success will depend on whether they can manipulate a distracted, ill-informed, impulsive, and erratic president into acting against his own instincts to avoid another regime-change campaign in the Middle East that could drag the United States into a messy and open-ended conflict. They have been able to get the president to dance to their tune on other issues, but can they do it again on an issue with much higher stakes for the country?

The IRGC terrorist designation is a political and symbolic decision with no upsides and plenty of potentially dangerous consequences for U.S. interests in the Middle East. It may make the administration look tough to its political supporters, but it doesn’t inflict further economic harm on Iran or extend the reach of a harsh sanctions regime that has already caused great hardship for the Iranian people. Foreign individuals and companies who do business with the IRGC—or IRGC-owned, -operated, or -affiliated businesses—can already be blocked from the U.S. financial system, have their assets frozen, or be subjected to lawsuits.

Iran is unlikely to take this designation in stride. Indeed, the majority of the Iranian Majlis is already demanding that the Iranian government retaliate. It is hard to predict how or when Iran might retaliate, but Tehran has numerous options in Syria, Iraq, Yemen, Afghanistan, and the Persian Gulf. Thousands of U.S. troops in the region, especially in Iraq and Syria where they operate close to Iranian-organized militias or IRGC personnel, will now have targets on their back if Tehran decides to respond militarily to the designation. If this happens, the United States would be forced to respond. The resulting tit-for-tat cycle could prove difficult to control because the two countries have no diplomatic or military communication channels in place to prevent a local incident from escalating into a serious military conflict. The Pentagon and U.S. intelligence community understand these risks, which is why both reportedly opposedthe designation. U.S. military officials are justifiably concerned about putting more American troops in danger and igniting a conflict with Iran that could undermine the anti-Islamic State campaign in Iraq and Syria as well as Washington’s diplomatic relationships in the region.

This additional sanction, like all previous ones, will not force Tehran to submit to American diktats. In fact, more financial pressure is likely to have the opposite effect, convincing Iranian officials that Washington will not settle for anything less than Tehran’s complete and unconditional surrender. It’s no mystery why Iranian officials would feel this way—why would any government consider negotiating when the other party isn’t open to compromise? The designation will only play into the hands of the most extreme hardliners in the Iranian political establishment who favor more aggressive Iranian behavior in the region and Iran’s withdrawal from the nuclear deal known as the Joint Comprehensive Plan of Action (JCPOA).

Moreover, the designation has the potential to stir up greater conflict and instability in a region that is already rife with both. It will create more headaches for the U.S.-Iraqi relationship and further complicate the position of Prime Minister Adel Abdul-Mahdi, who is already struggling to strike a balance between Tehran and Washington. Baghdad depends on Iranian-supported Shia militias to maintain security and keep a lid on the Islamic State. A military confrontation between U.S. forces and these units would force Mahdi to take sides between his two patrons. Given Iraq’s dependence on Iran for energy supplies, trade, and security assistance, he would likely choose his neighbor to the east.

The designation is part of a well-crafted game plan that Bolton and Pompeo have been peddling for years: apply enough economic, diplomatic, and military pressure to force the Iranian regime to either capitulate to American demands or fall apart. Before they joined the administration, both were vocal advocates of withdrawal from the JCPOA, Iranian regime change, and the preventive use of force against Iran. Since then, Pompeo has called for Iran’s unconditional surrender on the JCPOA. Both advisors successfully pressured President Trump to reverse his decision to withdraw all U.S. troops from Syria after proclaiming that U.S. troops will remain in Syria until “every Iranian boot” is expelled from the country.

The intent of Pompeo and Bolton is clear: provoke Iran into bolting from the JCPOA, re-starting its nuclear program, and escalating its regional behavior, thereby providing the United States or its regional partners with a pretext to use military force against the regime. They understand that the clock on the Trump administration is ticking and that their chance of overthrowing the Iranian regime will slip away in 18 months if the president isn’t re-elected. Both are pugnacious, stubborn, and ideological hawks. Even more worrisome, they know how to sell Trump on their agenda and play him like a violin—as they did in manufacturing the volte-face on Syrian troop withdrawal and pressuring Trump to propose a denuclearization deal at the Hanoi Summit that was far beyond the ability of Kim Jong Un to accept.

The known unknown here is whether the president, who for all his chest-thumping bravado has promised to extract America from wars in the Middle East, will remind his two advisors that he’s the president and they’re not. Will he make it clear that he does not want to take this country into a strategically opaque war with Iran that could be bloody, unpredictable, and disastrous for American interests in the region?  If we were bookies in Las Vegas, we would not take odds on this bet.

This article by Daniel R. DePetris and Richard Sokolsky originally appeared on April 8, 2019, in the Lobe Log.

Daniel R. DePetris (@DanDePetris) is a foreign policy columnist for the Washington Examiner and the American Conservative. His previous work can be found on CNN, USA Today, the Wall Street Journal, the National Interest, and Defense One.

Richard Sokolsky, currently a non-resident senior fellow at the Carnegie Endowment for International Peace, was a member of the Secretary of State’s Policy Planning Office from 2005-2015 and served in the State Department in six administrations.