How Will Game of Thrones End? Westeros Could End Up In a Cold War 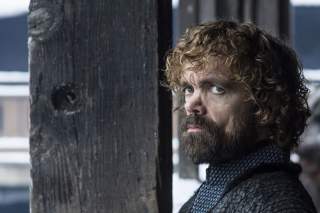 HBO’s groundbreaking television series Game of Thrones has forced its audience to confront unexpected and disconcerting new realities over the course of its eighth and final season. Many fans expected Daenerys Targaryen and her northern allies to harmoniously rule the Seven Kingdoms of Westeros after dispatching Cersei Lannister, the White Walkers, and the army of the dead. However, as Tyrion Lannister presciently noted in this season’s fourth episode, “we may have defeated them, but we still have us to contend with." By the end of Thrones’ penultimate episode, Daenerys has burnt the city of King’s Landing to the ground, clearly setting her at odds with fellow Iron Throne candidate Jon Snow and his cousins Sansa and Arya Stark.

While Daenerys anticipated having her own “unipolar moment” after establishing her faction as the most powerful in Westeros, the war against winter appears destined to be followed by a new Cold War. Once allies of convenience against their mutual enemies, the pact between the leaders of Dragonstone and Winterfell appears ready to fracture as the two remaining great powers struggle to construct a postwar order in their own image. While many fans hoped to see Jon Snow and Daenerys Targaryen rule Westeros side-by-side, Game of Thrones' final episode instead promises a return of great power politics, which may very well mirror the real-world collapse of the relationship between the United States and USSR in the aftermath of World War II.

Much like the Targaryen and Stark alliance, America’s partnership with the Soviet Union was rooted not in strong cultural ties or a shared value system, but in a timely convergence of their national interests. Both nations saw an alliance as essential to confronting the Axis powers and willingly set aside their enmities in pursuit of this goal. While the United States envisioned a radical restructuring of the postwar international order rooted in the widespread adoption of liberal values, the Soviets not only feared America’s preponderance of military power, but also desired to carve out its own sphere of influence in which it could serve as the dominant political and ideological force. These competing desires manifested themselves in conflicts over Soviet occupation of East Germany and support for global communist movements, eventually leading to a split between the two allies and the formation of rival power blocs.

Jon Snow’s Targaryen heritage may ultimately be the impetus for a Northern challenge to Daenerys’ rule, but the rift between the Targaryen and Stark forces existed well before this revelation occurred. While Daenerys aspired to rule each of the Seven Kingdoms, elements of the Northern political leadership, led primarily by Sansa Stark, supported political independence for the North along with control of, or at least meaningful political influence in, the Riverlands and the Vale. Daenerys’ vision of a unipolar Westeros dominated by a sole hegemonic power in House Targaryen is fundamentally incompatible with the North’s desire to be a co-equal power in the international order, making some form of conflict between the two sides almost inevitable.

Furthermore, the significant ideological differences between the Starks and Targaryens called into question the long-term prospects of this alliance from the outset. Even before arriving in Westeros, Daenerys had promoted the spread of a revolutionary ideology predicated on “breaking the wheel” of cyclical infighting that has long defined Westerosi politics. Meanwhile, the North remained heavily entrenched in its historical sociopolitical traditions, deeply suspicious of foreign powers, and fiercely committed to preserving its sovereignty.

While successful alliances between ideologically diverse states are certainly possible, strong ideological conflicts can exacerbate existing political differences. America’s disagreements with the Soviet Union over the division of land, power, and influence were deepened by each state’s attempt to spread their political ideologies across the globe, and the revolutionary nature of Daenerys’ politics was always destined to create tensions between the Targaryen state and the traditionalist Northerners.

These simmering tensions boiled to the surface following Daenerys’ decision to destroy King’s Landing. While Daenerys’ personal disdain for Cersei Lannister certainly influenced this act, viewers should consider the possibility that her loosing of dragon fire on the city was not the result of uncontrollable rage or creeping madness but was instead a calculated strategic move to demonstrate to Westeros the full extent of her military might.

Some historians have argued that President Harry Truman’s decision to drop nuclear bombs on Hiroshima and Nagasaki was intended largely as a signal of American power and resolve to, in Truman’s words, “keep the Russians straight,” and intimidate the Soviets into acquiescing to America’s postwar demands. Similarly, sensing both the North’s growing desire to resist her bid for control of all Seven Kingdoms and Jon Snow’s potential to challenge her for supremacy in Westeros, Daenerys’ attack on King’s Landing could be viewed as a warning that conflict with House Targaryen would result in them suffering a similar fate.

This show of strength could certainly work to deter an outright challenge to Targaryen rule. Even if Jon Snow is the rightful heir to the throne, any attempt to usurp Daenerys would almost certainly necessitate the use of military force. Unlike the Soviet Union which already had a fledgling nuclear weapons program by 1945, the North is seemingly incapable of securing a dragon of its own to establish any form of mutually assured destruction in Westeros. Similarly, the North is already battle-worn having waged multiple wars in recent years, and may determine that, in the midst of winter, it lacks the resources necessary to mount a military challenge to Daenerys’ claim to power even if it wants to.

However, even if the finale of Game of Thrones does not see the outbreak of yet another war, the creation of two competing security alliances in the vein of the Cold War remains a distinct possibility. The Soviets began positioning themselves as America’s security rival in the immediate aftermath of World War II even without a nuclear deterrent, initiating the blockade of Berlin, backing the communist coup in Czechoslovakia, and signing the Sino-Soviet Treaty of Friendship and Alliance before ever conducting a successful nuclear test. Additionally, given the choice to balance against the Targaryen army or bandwagon behind it, the North will have to strongly consider whether it can effectively pursue its own national interest in a world of Targaryen hegemony. The North is unlikely to perceive Daenerys as a benevolent hegemon after witnessing her commit war crimes, and may view balancing as the preferable option, perhaps by formalizing the alliance of the North, Riverlands, Vale, and Stormlands which successfully opposed a previous Targaryen hegemon in the show’s canonical history.

The final season of Game of Thrones has been replete with shocking twists and turns. Given the show’s excellent track record of embedding real-world international relations theory within its fantasy universe, don’t be surprised if a renewed great power competition between the Stark and Targaryen forces is one of the final twists the show has in store.

Matt Reisener is the assistant to the president at the Center for the National Interest.