How Will the Navy’s New America-Class Amphibious Assault Stand Up to These Chinese Copy-Cats? 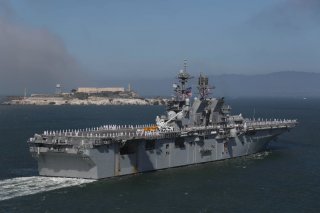 The U.S. Navy’s first in class USS America has now been operational for several years and is now joined by the USS Tripoli. Each of these first two America-class amphibious assault ships was engineered specifically to support expanded air operations including the Lockheed Martin F-35B Lightning II fifth-generation stealth fighter, Bell Boeing V-22 Osprey tiltrotor aircraft, and other vital air assets. The ships do not have a well deck. Instead, they were built with extra hangar space for aircraft and modified with a reinforced landing deck to withstand the heat associated with a vertical landing of an F-35B.  The third, now under-construction America-class amphibious assault ship features the return of the well deck to support ship-t0-shore amphibious operations. Overall, the U.S. Navy’s strategy with the America-class appears to involve an effort to build in a multi-domain, aviation, and maritime-capable amphibious assault force designed to achieve an optimal blend of integrated air and sea attack operations.

China now appears to be copying the U.S. Navy effort to architect distinct, yet closely integrated air-and-sea focused elements of amphibious attack. In terms of amphibious attack warships, China has both the Type 075 ships with a heavy aviation focus as well as a maritime-oriented Type 071 amphibious landing ship. Both of these new Chinese Navy variants were included in the recent end-of-the-year assessment, according to a report in the Communist party-backed Global Times newspaper. The Type 071 ships, which were assessed in joint operations alongside the Type 075 ships, were operated with air-cushioned landing craft to prepare for ship-to-shore attack. The People's Liberation Army Navy has launched three Type 075s as of 2021 and plans to add more Type 071s as well.

“A task force consisting of the Type 075, the Type 071 and an aircraft carrier will serve as a tremendous deterrent to "Taiwan independence" forces, and these warships will play a leading role in striking targets in the east side of the Taiwan island if the occasion comes to that,” the expert says in the paper.

How many of these amphibious assault ships will the PLAN build? Is it a clear effort to mirror or copy the U.S. Navy’s America-class in terms of configuration, force structure, and concepts of operation? It certainly seems possible.