How Would China Respond to a Russian Invasion of Ukraine? 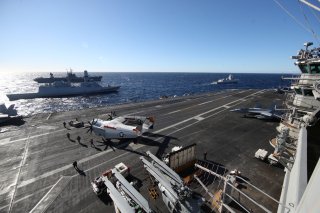 There is a less recognized but equally dangerous subtext to the expected Russian invasion of Ukraine: the question of China.

Could China feel emboldened by a successful Russian invasion of Ukraine and seize the opportunity to invade and annex Taiwan? China may see an opportunity to move if the United States is distracted as it attempts to secure sensitive border regions in Eastern Europe. Moreover, depending on the United States’ response to any Russian aggression, China may estimate that U.S. forces would not directly confront China to defend Taiwan.

“China is watching. We shouldn’t lose sight of the fact that what we are about to see in Ukraine could be repeated further east,” said Tim Morrison, Senior Fellow at the Hudson Institute and former Deputy Assistant to the President for National Security.

Pentagon officials have routinely emphasized that U.S. forces will not fight in Ukraine, and Russian forces are expected to attack at any moment. Could China gamble on the possibility that the United States might take a similar stance regarding Taiwan? This could be made more likely if U.S. Navy forces were not forward operating in close enough proximity to intervene against a Chinese amphibious assault on Taiwan.

Regardless of how the United States would respond, Morrison’s point that China might seize an opportunity to invade rings true in light of China’s massive uptick in drills, war preparations, and fighter jet patrols near Taiwan.

However, as was the case with Russia’s military buildup near Ukraine, satellites observing the Pacific theater would likely detect a large Chinese amphibious attack force being prepared to move on Taiwan. This might give the U.S. Navy, which already maintains a regular presence in the region, an opportunity to marshal the forces and resources necessary to counter a Chinese attack. These forces would likely include F-35 fighters, Tomahawk missiles, and Amphibious Ready Groups.

As Japan’s Southern Islands are between 500 and 1,000 miles north of Taiwan, it is entirely possible that a U.S.-Japanese coalition might be able to intercept or attack an approaching Chinese amphibious force. Tomahawks, for example, can travel as far as 900 miles, and newer Tomahawks can use a two-way data link and sensor to adjust course and destroy moving targets at sea. In tactical terms, this means that a Navy destroyer armed with Tomahawks might be capable of targeting Chinese amphibious assault ships at distances of up to 900 miles.

These response capabilities would be crucial in any effort to defend Taiwan. This is because, unlike Ukraine, Taiwan is surrounded by water, which would make it difficult to quickly deploy mechanized land forces to defend Taiwan.