How Would the United States Respond to a Low-Yield Nuclear Strike? 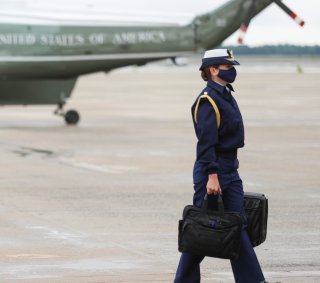 Russia’s decision to put its nuclear forces on “high alert” has many wondering if Putin might actually consider using nuclear weapons. If the Russian military continues to struggle against Ukraine’s highly motivated fighters, could Putin feel backed into a corner and decide to fire a low-yield nuclear weapon, assuming that the West would not imperil the fate of the world by responding with nuclear weapons?

The question is an important one, and American leaders have decided not to escalate in response to Putin’s actions due to the incredible risks of nuclear war. At the same time, the Pentagon has been clear to emphasize that the United States has full confidence in the ability of its nuclear triad to deter any adversary from carrying out a nuclear attack.

What about the question of tactical nuclear weapons, which many worry might lower the nuclear threshold and make nuclear war more likely? This question has been raised in response to several key issues, including the development of the U.S. Air Force’s Long-Range Standoff weapon, a cruise missile capable of launching low-yield nuclear attacks from safer distances. The weapon is designed to strengthen deterrence by ensuring a second-strike nuclear capability in the event that other elements of the nuclear triad are rendered inoperable. This kind of nuclear weapon might also be needed to deter an enemy attack if nuclear-capable aircraft were unable to operate over hostile territory due to advanced enemy air defenses.

Similar questions were raised in response to the 2018 Nuclear Posture Review, which called for several low-yield nuclear weapons to be added to the U.S. nuclear arsenal, including a low-yield Trident II D5 variant and a submarine-launched nuclear cruise missile.

There are two prevailing schools of thought regarding this crucial question. Some argue that any use of nuclear weapons should be met with a catastrophic response. Proponents of this approach argue that there should not be a “proportional” response in the form of a tactical nuclear response to a tactical nuclear attack. They argue that promising the complete destruction of the attacker will ensure that nuclear weapons of any kind are not used.

Others, however, argue that having an arsenal of tactical nuclear weapons simply adds crucial new elements to the United States’ deterrence posture. Years ago, when the 2018 Nuclear Posture Review was being debated, former Defense Secretary Jim Mattis said that adding lower-yield nuclear weapons to the U.S. arsenal was intended to bring Russia back to the negotiating table. Certainly, as the existence of tactical nuclear weapons introduces a more varied and substantial threat equation for potential adversaries to consider, they could greatly contribute to the United States’ deterrence posture.

The question of how the United States would respond to a Russian nuclear attack has not been publicly settled. However, it is clear that the United States remains confident in its nuclear triad deterrence structure.