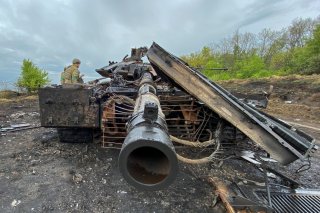 The Ukrainian will to fight and die if needed for their homeland and children amounts to an “X” factor which is impossible to quantify or calculate. Indeed, the collective fervor and resolve with which Ukraine has openly defied Russia and unexpectedly mounted a crippling defense is probably the largest reason for Ukraine’s success. Yet at the same time, Russia has also greatly contributed to its own defeat; the Russian military’s assault was beset with tactical errors, strategic miscalculations, supply chain blunders, and pervasive morale problems.

Many former and current U.S. generals, experts, and observers have cataloged Russia’s many missteps and errors during the opening weeks of the assault, which resulted in Moscow’s failure to capture Kyiv. One expert observer, a former senior leader in the intelligence community and former Army Vietnam combat veteran went as far as to make a “list” of Russian errors.

“I remember on or about day three of the invasion, right at the end of February, I made a list of things that I thought the Russians had messed up. And I had a list of twenty-nine things. It's hard to believe that you could have had a group misfire on so many in so many ways, whether it was logistics, plan of attack or attacking on too many fronts. And, I mean, that was a colossal list,” Mike Mears, former director of human capital for the Central Intelligence Agency, told The National Interest in an interview.

International support for Ukraine was galvanized after a defiant President Volodymyr Zelenskyy chose to stand in the middle of downtown Kyiv and vowed to defend his country, despite that many assumed that the massive Russian Army would overrun most if not all of Ukraine in short order. In fact, the Russians had already made a successful incursion into eastern Ukraine in 2014, which did not reveal that their military’s combat power and resolve were far more brittle than believed.

“Zelenskyy has absolutely captured the hearts and minds of people, starting off with that well publicized act of courage where he said, ‘I don't need a lift … I need to ammo. I'm staying here.’  He voted. Great leaders vote with their feet and with their calendars. And that's what he did,” Mears said.

Mears spent many years training leaders during his tenure at CIA, and has cultivated a sense of the kinds of attributes and characteristics that are exhibited by great leaders. The ability to inspire is critical.

“I was talking to a Ukrainian the other day, and I asked him, I said, Did you vote for Zelenskyy? And he said, ‘Oh, no, no, I thought the guy was a comedian. I didn't vote.’ And then he paused. And he said, ‘and you know, today, I'll die for him.’”