Huawei: A Trojan Horse Inside Taiwan? 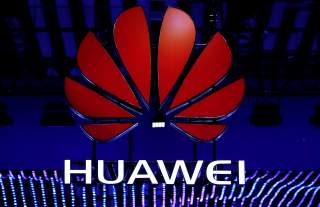 Taiwan’s national security concerns do not appear to match that of its lone bodyguard, the United States, after it was discovered that Huawei Technologies has opened its first official storefront on the self-ruled island of twenty-three million.

Based in Shenzhen, China, Huawei hung its first shingle in Taipei in April and the company’s public relations effort is now in full Polar Express-mode at the Christmas extravaganza at Banqiao Station. Huawei-themed decorations dominated the show, including a children’s choo-choo train ride and a massive Santa with the company’s logo on it. My own children were giddy.

The telecommunications giant has close ties with the People’s Liberation Army (PLA) and Ministry of State Security. The state-owned China Mobile Communications Group is Huawei’s largest shareholder, basically making Huawei an appendage of Beijing’s techno-Orwellian order. China is now constructing a massive surveillance state with a social credit system based on your attitudes and opinions of the Communist Party. Score too low and your kids do not get into university.

Kitsch Liao, a Taiwan-based cybersecurity specialist, said that Huawei has built backdoors that serve as a dual-threat to communications—capable of both espionage and sabotage.

Even though China has repeatedly threatened to invade, doing business with Huawei has been kosher at low levels since 2005 when the Hong Kong-branch set up an office in Taipei. Though it was shut down by the government ten months later, it reappeared in 2012 when Huawei equipment in the core networks of Taiwan’s telecommunication service providers was discovered.

In 2013, Taiwan’s top security entity, the National Security Bureau (NSB), tried to shame the government in an attempt to stop Huawei’s growing presence in the local market, going so far as releasing embarrassing statistics showing that even the Ministry of Justice’s Investigative Bureau (equivalent to the U.S. FBI) and the President’s Office were using Huawei network cards in their cell phones.

The efforts were naïve, Liao said. No more evidence was needed than to type in “Huawei” and “TW” in the search field of Shodan, a search engine popular with hackers. Results indicated that Taiwan is inundated with Huawei equipment, including webcams.

“The bottom line is that Huawei and ZTE hardware, even if we were to preclude claims of Chinese security apparatus working through them, are inherently unsafe,” he said. “I believe that government agencies and contractors should establish strict rules regarding the use of personal devices made in China, and that strict penalties should be in place for the unauthorized use of devices in handling government-related documents.”

Liao said the NSB’s Fifth Bureau (Technical Intelligence and Telecommunication Security) should “accelerate the release of relevant technical intelligence to convince the Taiwanese public of the nature of the threat.”

Australia and New Zealand have prohibited the company from doing business for fears of eavesdropping and cyber security fears. Now Canada and the United Kingdom are rethinking their relationship with Huawei. Earlier this week the head of Britain’s MI-6, Alex Younger, voiced national security concerns over Huawei, particularly on the spy service’s ability to monitor the company’s new 5G kit.

Australia, Canada, New Zealand, the United Kingdom, and the United States are part of the Five Eyes signal intelligence alliance. Though Taiwan is not officially part of this collective, it does operate a joint signal intelligence antenna facility on Yangmingshan Mountain, just north of Taipei. The facility at Pingtung Li is managed by NSB and the U.S. National Security Agency.

The U.S. military also makes use of Taiwan’s early warning radar facility on Leshan Mountain on the west coast facing China. The radar is the most powerful surveillance radar in the world, capable of tracking 1,000 targets varying from ballistic missiles to air-breathing targets, such as aircraft and cruise missiles. Surveillance is reportedly well within 800km inside China, providing unique surveillance of the PLA Air Force’s operations.