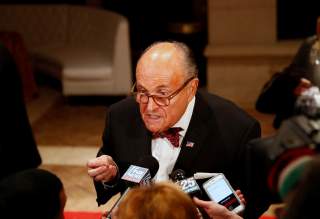 Rudy Giuliani on Monday accused his former associate, Lev Parnas, of telling multiple lies during a media tour last week, including about whether Attorney General William Barr was aware of the Trump lawyer’s activities related to Ukraine.

“I will tell you this definitively, I never spoke to Attorney General Barr about this investigation. Never once,” Giuliani told Fox News’s Laura Ingraham.

Giuliani was responding to Parnas’s claims in interviews with CNN and MSNBC last week that it was “impossible” that Barr was unaware that Parnas worked closely with Giuliani in 2019 to collect and disseminate information related to Ukraine.

“Mr. Barr had to have known everything,” Parnas told MSNBC’s Rachel Maddow in an interview on Jan. 15.

“That is a flat-out, absolute, despicable lie,” Giuliani responded Monday.

Parnas’s interview was his first since a New York grand jury indicted him and three associates on charges that they conspired to make illegal campaign contributions in 2018. The indictment alleges that Parnas contributed in June 2018 to then-Texas Rep. Pete Sessions as part of a scheme to force Yovanovitch out of office.

Sessions sent Secreary of State Mike Pompeo a letter on May 9, 2018 urging him to recall Yovanovitch.

Parnas, who has pleaded not guilty in his case, recently gave House Democrats text messages he exchanged with Giuliani and other associates regarding his Ukraine efforts.

Parnas’s lawyers on Monday submitted a filing in his case requesting that Barr recuse himself from the investigation. The attorneys also requested that a special prosecutor from outside of the Justice Department be appointed to oversee the probe. The Justice Department declined comment.

Giuliani suggested that tape recordings exist that could contradict some of Parnas’s allegations.

Giuliani said that he told Parnas that he would not contact Barr related to their Ukraine-related efforts.

“I have been circumspect, careful, exceedingly careful. Not only that, Lev Parnas knows that,” Giuliani said.

“I told Lev Parnas several times that I would make sure I would never go to the attorney general with the … so I wouldn’t compromise him. I am very disappointed and hurt by him, but that one really is a shame — to try to implicate somebody who had nothing to do with it.”

Giuliani also said that he felt “misled” by Parnas, but did not elaborate on how the Soviet-born businessman misled him.