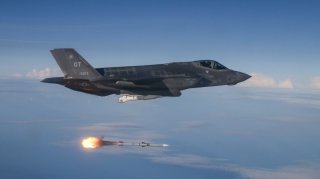 The United States Air Force finally carried out a successful test of its AGM-183A Air-launched Rapid Response Weapon, also known as ARRW. The test, though announced on Monday, occurred on 14 May.

In a statement released by the Hill Air Force Base, the U.S. Air Force explained that “Following separation from the aircraft, the ARRW’s booster ignited and burned for expected duration, achieving hypersonic speeds five times greater than the speed of sound.”

It was not the first time the U.S. Air Force had tested the munition, though it did mark the first occasion that an ARRW test went according to plan.

"The test team made sure we executed this test flawlessly," said Lt. Col. Michael Jungquist, 419th FLTS commander and GPB CTF director, in the statement.

"Our highly-skilled team made history on this first air-launched hypersonic weapon. We're doing everything we can to get this game-changing weapon to the warfighter as soon as possible."

American defense contractor Lockheed Martin explained in its own press release that “hypersonic technology has continued to present several complex engineering challenges. Going Mach 5, sometimes even faster, generates extreme levels of heat, driving the need for innovative materials, sensors and electronics to withstand such speeds throughout its journey.”

Heat aside, “these systems must be able to maintain consistent communication connections, as well as considerable intelligence to perform precise maneuverability techniques to overcome a wide range of advanced defense systems and extreme contested environments.”

The ARRW missile uses a booster rocket to get the boost-glide vehicle to the correct altitude and speed, at which point the vehicle separates from the rocket body and glides to earth. During its flight toward its target, the boost-glide vehicle follows an irregular path. Combined with its Mach 5 or greater speed, this will make it difficult for traditional air defenses to shoot it down.

“This was a major accomplishment by the ARRW team, for the weapons enterprise, and our Air Force,” said Brig. Gen. Heath Collins, Air Force program executive officer for weapons.

“The team's tenacity, expertise, and commitment were key in overcoming the past year's challenges to get us to the recent success. We are ready to build on what we've learned and continue moving hypersonics forward,” he continued.

The AGM-183A Air-launched Rapid Response Weapon program has experienced several hiccups on the way to this successful launch: three test launches and three failures. The first and third tests were non-starters—the missiles failed to separate from their underwing pylon mountings. During the second ARRW test, the missile’s rocket engine did not ignite, and the ARRW fell into the Pacific Ocean.

The U.S. Air Force sees the ARRW hypersonic weapon as a crucial part of its future strategy against China or Russia. With one successful test flight under its belt, the ARRW program is ready to move forward.