Hypersonic Missiles on Destroyers? This Navy Plan Is Shaking Up the High Seas 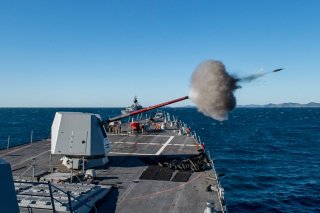 The U.S. Navy’s plans to arm its fleet of destroyers with paradigm-changing, ship-launched hypersonic missiles are shaking up the high seas. According to Navy leaders, this new capability will present an ability to destroy enemy ships at five times the speed of sound, descend upon high-value land targets in minutes from great distances, and even intercept incoming anti-ship missiles with a high degree of precision.

“For way too long the Navy has invested in defensive systems. We made a transition to offensive systems and the Navy is leading the way,” Chief of Naval Operations Adm. Michael Gilday told members of the Senate Appropriations Subcommittee on Defense at a 2023 budget hearing. Responding to inquiries about the program from Sen. Richard Shelby, (R-AL), Gilday explained how the Army and the Navy were collaborating on a Common Hypersonic Glide Body (CHGB) to support their hypersonic weapons systems. The Army plans to field its ground-mobile Long-Range Hypersonic Weapon by 2023 and the Navy says it’s on track to deploy its Conventional Prompt Strike on destroyers by 2025.

The glide body is a warhead that gets thrust into the atmosphere at hypersonic speeds traveling five or more times the speed of sound. Once airborne, the weapon can skip along the upper boundaries of the earth’s atmosphere before relying upon the sheer speed of its descent to strike a target. Destruction of a target can be accomplished by the sheer force and speed of impact.

“Our all-up round (CHGB) is a 34-inch booster which will be common between the Army and the Navy. We will shoot exactly the same thing the Navy shoots out of a sub or ship,” Robert Strider, deputy of the Army Hypersonic Project Office, told an audience Aug. 11 at the Space and Missile Defense Symposium in Huntsville, AL.

Citing the promise of the technology and the rapid progress of the program, Gilday said the Navy’s hypersonics program has met every benchmark milestone. He explained this has been in large measure due to the fact that the Navy doubled its hypersonics budget from $700 million to $1.4 billion.

Gilday’s emphasis upon offense is quite significant. Indeed, it parallels current thinking about how, when it comes to missile attacks and missile defense, offensive and defensive operations are deeply intertwined. Certainly, one clear way to increase protection against hypersonic missiles is to ensure catastrophic, rapid, hypersonic retaliation. Perhaps in this respect, hypersonic weapons could operate as a conventional application of strategic deterrence by informing potential adversaries that an attack with hypersonic weapons will instantly be met with a massive offensive strike in kind. There is also the possibility of using hypersonic projectiles themselves, which are maneuverable and difficult to track, as interceptors against incoming hypersonic missiles, as they could travel at speeds necessary to perform an intercept.