Hypothetical: How A Real U.S.-China War Could Start 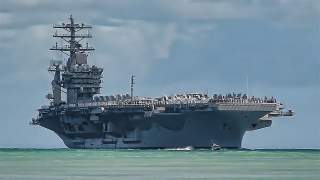 In contrast to this hard line, the tone of some official scholars is more temperate. In an Associated Press interview, a professor of international relations at Renmin University of China appeals for calm on both sides. He urges the Chinese and U.S. governments to sit down for a face-to-face exchange of views on the mutual accusations of cyberattacks, and to resolve the conflict through dialog and negotiation to prevent the conflict from escalating out of control.

Prohibitions on internet access are implemented in government organizations, state-owned enterprises and all schools, libraries and other public bodies. Even so, how can the authorities control 500 million netizens and 300 million bloggers? Most netizens ignore the prohibitions and continue to access the internet at home. Internet access is unstable and intermittent, but the wireless internet service that the United States is providing to China has not been cut off.

After “stand-in” protests against the Chinese government have been suppressed for two days, anti-American protests suddenly break out in Beijing, with hundreds of people gathering around the U.S. embassy, shouting out anti-American slogans, denouncing the United States for sabotaging China’s internet and demanding an end to the U.S. cyberinvasion. Similar protests quickly follow in Shanghai, Guangzhou, Chengdu, Wuhan and Shenyang, where people gather around U.S. consulates and yell out slogans while waving the five-starred red flag of the People’s Republic of China. “Down with American hegemonism!” “We vehemently denounce American sabotage of China’s internet!” “Resolutely beat back the U.S. cyberinvasion!” “Creating chaos in China has ulterior motives!” Given the uniformity of the slogans and banners throughout the country, outsiders quickly realize that these protests have been orchestrated by the Chinese government.

Further anti-American protests break out in other cities over the next two days. The number of participants grows from hundreds to thousands, and in Beijing and the rest of China’s largest cities, the protests rapidly evolve into smashing and looting. People begin throwing rocks, bricks and bottles at U.S. consulates; some set American flags on fire and toss them into consulate compounds, while others overturn vehicles and set them alight. Black smoke rises everywhere as cheers break out among the crowds. Bystanders scream in terror and run off.

Apart from occasionally yelling or motioning for people to desist, the Chinese police officers stationed around the consulates spend most of their time standing idly about as rocks, bricks and bottles fly over their heads into the consulate compounds, and no one is arrested.

On Facebook and Twitter, netizens all over China expose the identities of local police officers, city managers and joint defense officers who are masquerading ordinary citizens to lead protests and take part in the smashing and looting.

Washington sends a diplomatic notice to Beijing strongly protesting the violent demonstrations at the U.S. embassy and consulates, and demanding that the Chinese government take measures to protect American citizens and facilities. A foreign ministry spokesman responds that the Chinese government does not approve of the radical actions around the consulates and appeals to the Chinese public for calm. At the same time, he points out, “The problem must be resolved at its source”; the U.S. government needs to immediately cease its cyberinvasion and end its interference and sabotage of China’s internet before peace can be restored.

The news media report that a U.S. aircraft carrier, the USS George Washington, has led the Seventh Fleet out of Japan’s Yokosuka naval base toward the East China Sea to form a joint force with the USS Nimitz battle group patrolling the South China Sea.

As night approaches, the U.S. consulate in Chengdu comes under siege, and someone starts hurling Molotov cocktails into the consulate compound and main building. The consulate catches fire, and flames spread rapidly as smoke billows against the night sky. Suddenly excited and terrified cries go up: “He’s dead! He’s dead!”

International media report that the U.S. consul general stationed in Chengdu has fallen victim to the violent protests. Foreign governments issue statements condemning the atrocity. It’s reported that he attempted to lead consulate staff out the back door to safety, only to be discovered by the protesting mob. Chinese nationals employed at the consulate came under verbal and physical attack by protesters cursing them as “traitors” and “American running dogs.” When the consul general tried to protect two female staff, he was struck in the head with a brick. Also falling victim were five consular staff, including two Americans and three Chinese, all of whose bodies were set alight by the screaming mob.

Chen Pokong is a veteran of the Tiananmen Square democracy movement; he has authored over ten books, writes a regular column for Radio Free Asia, and is regularly invited to speak on Voice of America Chinese. This chapter was translated by Stacy Mosher, a translator and editor based in New York City. This piece was originally featured in May 2016 and is being republished due to reader's interest.