I Am In China Watching the Coronavirus Crisis Unfold. Here Is What I Am Seeing. 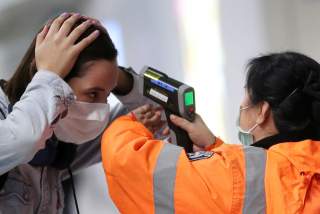 There are two small family-run restaurants still open on an otherwise completely empty pedestrian street nearby where I am staying in Nanjing, China.

“How are you able to remain open?” I asked the proprietor of one, despite the fact that restaurants are ordered to be closed to prevent the continuing spread of coronavirus.

“Not open,” he said. “Look at the sign. The lights aren’t on. But if people come, then I have to let them eat.”

To translate the language of a savvy Chinese small businessman: come on in and have some rice wine!

Although the Spring Festival holiday ended on February 9, the return to ordinary business and school has been delayed across the country. University gates remain closed indefinitely. Elementary and high school students are taking classes by video application. Suddenly the smart work app Ding-Ding shot up to number one in the “Business” category in the Apple app store for the China region and accumulated more than 300,000 new reviews (more than doubling), most of them negative, from disgruntled students, in just about a week.

When the coronavirus first began to spread, the government and the official media did not acknowledge—or perhaps even realize—how serious a problem it was and would become. Wuhan was put under quarantine on January 23. Public places were closed on January 25, but only about half of the people on the street were wearing face masks. On January 26, the Nanjing Metro (and others in other cities) required that all riders wear masks. Then on January 30, the major malls in Nanjing closed their doors.

On January 8, the Jiangsu Provincial People’s Parliament issued a new set of directives about how to respond to coronavirus. After establishing Xi Jinping’s and the Party’s leadership over the epidemic control measures, the rest of the document lays out specific orders and recommendations, including the order/recommendation to wear face masks and not participate in large group activities, which people had already been following.

A separate set of orders was put out by the district government of Jianye, a district located in the southern part of Nanjing’s urban area, which laid out when businesses would be allowed to reopen. Businesses in different industries will be allowed to reopen at different times, based on how critical they are deemed to be to the economy and people’s life, in order to “stagger” the return of workers. Starting with producers of medical goods and items used to control the epidemic, along with other important industrial producers, finance, and the all-important category of food delivery, workers in those industries began returning to their jobs on January 10.

Science and research, R&D, web and technology platforms, and businesses involved in foreign trade can return to normal operations on January 15; commerce and distribution on January 20; and full-service restaurants on January 29. Businesses that are focused primarily on entertaining large amounts of people in a single space, such as movie theatres, teahouses, gyms, beauty parlors, saunas, and karaoke, in addition to brick and mortar education and training schools, remain closed indefinitely. Some offices have already reopened in partial capacity, but most white-collar workers are working from home.

The newly-announced measures in one district in one city are broadly similar to responses in other districts and other cities. The details vary, but overall administrative governments at different levels have gradually put new policies in place as the severity of the epidemic continued to become clearer and clearer. Also on February 12, multiple officials in Wuhan and Hubei province were fired, including Wuhan Communist Party Secretary Ma Guoqiang, who early on gave himself a self-grade of “80-out-of-100,” and replaced by Xi allies.

The continued pushing back and staggering the return to semi-normalcy is probably necessary to avoid what would have otherwise been a massive movement of people. The Spring Festival travel rush, in which Chinese return to their ancestral homes to celebrate lunar new year, is the largest mass migration in the world. It’s a two-way movement. The first part, the return home, was already playing out when the epidemic began to take off, likely contributing to its spread.

Were everyone to return to their place of work and residence at the same time, then it might have caused a second wave. By lengthening the school holiday and slowly reopening businesses, China hopes to avoid such a fate.