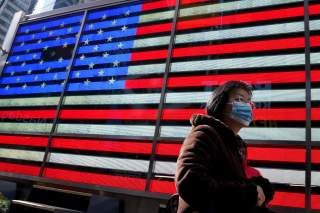 New York City, “the greatest city on earth,” is in full shutdown mode.

Establishments are putting the “closed for business” sign on their front doors. New Yorkers are wandering the streets like zombies, wondering what to do when they aren’t teleworking from home. People, in general, are beginning to get cabin fever. Normally when the fever sets in, some of us would grab a beer or two at the bar around the corner or ride the subway to a favorite eatery to pass the time. Unfortunately, New Yorkers can’t even do that anymore.

As one would might expect, the city’s most popular landmarks have been the most negatively effected by the coronavirus outbreak. The Center for Disease Control’s recommendation that people stay away from gatherings of over 50 people for the foreseeable future—in addition to the official guidance issued from City Hall—means that the Big Apple will lose a significant amount of money over the next month. The tourism industry, which pumped about $44 billion into New York last year, is going to see a precipitous decline in revenue thanks to this highly contagious virus.

If you happen to be stuck in Manhattan looking for something to do, don’t bother—many of the city’s top attractions are not operating.

1. The New York Public Library: This majestic, marble-laced building in the center of Fifth Avenue is a must-see for history buffs and a highly useful resource for researchers in every field imaginable. No more. The famous reading room, where books line the walls from the floor to the ceiling, is a no-go area for the time being.

2. The Statue of Liberty: This small island featuring the infamous Lady Liberty, located in the waters of the Upper Bay between Manhattan and New Jersey, is in the backdrop of every postcard or poster featuring the New York City area. The monument is an indelible part of the skyline and one of the most sought after destinations for tourists overseas. Over 4.5 million people visited the island in 2016, spending $263 million in the process. Those visitors will now have to reschedule their tours.

3. The Met Opera: Established in 1883 by a group of wealthy businessmen, the Metropolitan Opera is New York’s foremost opera house. If you want to hear the genre’s world-class performers tout their wares, go to this building, sit down in the lush red seat, marvel at the gold plating, and have the time of your life. Just make sure you don’t waste your time this week.

4. Carnegie Hall: Conceived by the industrial titan Andrew Carnegie in the 1880’s during a trip to Scotland, Carnegie Hall is New York’s top venue for classic music. Orchestras, quartets, ensembles, and solo artists from around the world descend upon this city landmark to share their gift with the public. The venue is part business, part-public service, a place where a stressed out New Yorker can get the endorphins flowing with a two-hour performance at a relatively manageable price. The music, however, has stopped until the authorities in New York say otherwise.

5. The Guggenheim: The Metropolitan Museum of Art gets most of the accolades from art lovers, but I’m partial to the Guggenheim further uptown. This museum in a paradise for those who don’t even consider themselves art lovers. Make your way to the top floor and get yourself lost in a sea of statues as far as the eye can see. For a moment, you may think you traveled back in time to ancient Rome. One hopes those statues don’t lose some of their luster as the museum delouses the entire building.

Coronavirus has turned New York City, a hub of activity for everybody and anybody, into a place where entertainment is now a luxury.