I Bought a Truck on Carvana. Here’s How it Works. 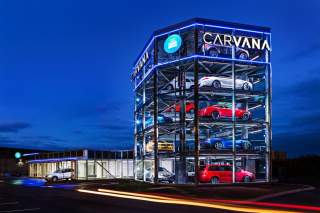 I’m a busy guy and I hate shopping. So when I decided to finally buy that old truck I’ve always wanted, I tried used-car app Carvana.

I didn’t hate it. On the other hand, I took my sweet time and that helped.

Bottom line: to get the car you really want on Carvana, you might have to wait. And if you finance through Carvana, you could end up paying more than if you get a loan from an outside bank.

But you’ll get your car. It’ll be super-convenient. And the people Carvana assigns to walk you through the process will be friendly, honest and helpful. At least they were in my case.

“The U.S. used car industry is very large, highly fragmented and due for disruption,” Barron’s stated.

Here’s how it works. Download the app on your smartphone. Create an account. Search the company’s inventory of used cars and trucks. Pick your vehicle. Pay cash or get a loan from Carvana-partner Bridgecrest or from the bank of your choice.

In major cities, you can pick up the vehicle from one of Carvana’s garage-like “vending machines.” Or a company rep will deliver the car or truck to your door. Fill out all your paperwork, pay your taxes and Carvana send you your plates.

Every couple days starting in the fall of 2019, I browsed the app, looking for my truck. It finally appeared in the Carvana inventory in December. I stood in my kitchen in my underwear at 2:00 in the morning and bought it.

Carvana assigns a handler to your “new” vehicle. Mine called me an hour before she was due to arrive at my door. She was apologetic. “Your truck is exactly as listed,” she said, “except for one thing. I think the previous owner was a smoker.”

The listing for my truck hadn’t mentioned the lingering smell of old cigarettes. “Do you still want the truck?” she asked.

That depended, I told her. So my rep delivered the truck and let me drive it around a while. I barely smelled cigarettes. And I knew whatever scent came with the truck would fade in a few days. As I write this three weeks later, I barely smell anything anymore.

So I signed for the truck. Carvana lets you return a vehicle within a week, no questions asked. My weeklong grace period passed without me even noticing. I was happy. I got exactly the truck I wanted and, in buying it, I never even had to leave my house.

I don’t always trust these new app-based market-disruptions. Uber as often or not sticks me with a chatty, unsafe driver. In my experience, half of AirBnB listings are dishonest. I swear some of the people working for the major food-delivery apps sometimes sample my food.

But when it came to buying a used truck via an app, the worst thing I experienced was a few light whiffs of someone’s old Camel Lights. Carvana was fine.