I Live in New York City. Coronavirus Is Killing My Home. 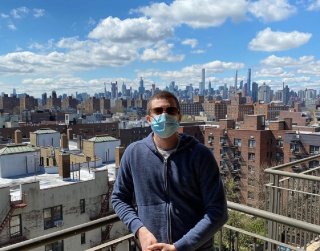 When the national health catastrophe that is the coronavirus is finally over (hopefully sooner rather than later), there will be a time when the United States Congress appoints an independent, bipartisan commission to investigate the litany of inter-agency squabbles, missed signals, dreadful government supplies, and uneven distribution chains that have made the virus far deadlier than it needed to be. Congressional support for an inquiry is already rising on both sides of the political aisle, with Republican and Democratic lawmakers filing their own bills to establish a fact-finding mission akin in scope to the 9/11 Commission more than a decade and a half ago.

But today, not many people in the New York City area are talking about investigations or congressional committees. We’re too busy trying to get through the day without shedding a tear.

Never in my life have I experienced the Big Apple--my home--in such a grave state. The 1,867 deaths from covid-19 are just a figure on a piece of paper. You don’t feel the full impact of the number until you walk outside, see the grim faces of ordinary New Yorkers passing you by on the sidewalk, and hear the sounds of wailing ambulances speeding to the nearest hospital. As a resident living a block away from Mt. Sinai-Queens, sirens going off every few hours is not out of the ordinary. But once every few hours has turned into once every 15 minutes. And as those ambulances pass my bedroom window, I can’t help myself but imagine the fear the patient is feeling inside as he battles a high fever, struggles to breathe, and wonders if he will make it to the overcrowded ICU ward in time.

Politicians love to sensationalize. But New York Governor Andrew Cuomo is entirely correct when he tells reporters during his daily news conferences that living in New York during the era of coronavirus is a distressing and agonizing experience. Every day feels like a lifetime. "I think we all feel the same, these stresses, this country, this state — like nothing I’ve experienced in my lifetime,” Cuomo said during his April 4 briefing. Emergency room doctors and trauma surgeons spend years training for these kinds of situations. Yet after two weeks of 12 to 18-hour shifts in the dozens of public and private hospitals throughout the city, the ongoing pandemic is making the most stoic, unsentimental health care professional into an emotional mess. Some will likely have significant post-traumatic stress disorder when this crisis is done. As one of those brave doctors told NBC News’s New York affiliate, "you can smell fear. You smell death.”

New York’s public health infrastructure is in an alarming state of disrepute. The pandemic that never seems to end is overwhelming the capacity and capability of the hospital system to provide adequate care for its patients. Doctors and nurses are making due the best they can, jerry-rigging their own masks and medical gowns at home and begging hospital administrators for more equipment. One of New York City’s biggest hospital networks, Northwell Health, has instructed staff to ration ventilators and remove patients from the machines if there is no evidence of improvement in their state. EMTs are being told to move on to other calls if they can’t find a pulse, no doubt a measure to preserve space for the thousands of covid-19 patients to come. The virus is impacting every industry of the economy in this city—even the death industry, where funeral directors are unable to keep pace with the bodies that arrive in their funeral homes.

If this all looks dreary and depressing, that’s because it is. New York City has never experienced an event like this since the 9/11 terrorist attacks, a gruesome and psychologically shocking event that will be etched the minds many New Yorkers (certainly the ones who lost friends and loved ones) as a day of infamy. But as stomach-churning as 9/11 was, it was a singular event. The cover-19 crisis is a series of events impacting all five boroughs and is becoming worse each time the sun rises. Every community (some more disproportionally than others), every demographic, and every level of the economic ladder is affected.

Full confession: I’m not the sentimental type. It takes a lot for me to get upset. But I have noticed a sea-change in my emotions. The wave of coronavirus hovering over New York and tearing families apart has hit me over the head like a wooden plank. I now find myself calling my parents more. I check in with my friends more frequently than I normally would. I see a cardinal chirping in a tree, a puppy biting his leash, or a mother playing with her child in the park and find my eyes misting—as if my body is craving the slightest dose of joy. I’m learning the hard way that none of us should take anybody or anything for granted.

New Yorkers aren’t out of the woods yet. Cuomo and New York City Mayor Bill de Blasio are telling us that the situation in the city could get very bad, very quick this week. Unfortunately, there is no evidence proving them wrong. Hundreds of additional New Yorkers and thousands of additional Americans will die to this disease in the weeks to come. The death projections of 100,000-240,000 that once felt wild and unrealistic are now well within the range of possibility.

City officials keep insisting that New York City will come out of this pandemic stronger than ever before. It’s up to every one of us to hunker down, be kind to one another, and do what we can in the interim.