I Saw Israel's New Tactical Drones Up Close. They Could Be Revolutionary. 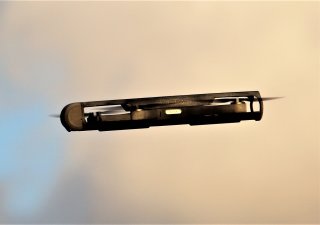 Israel has been a pioneer in drone innovation since the 1980s when it used drones effectively to find and then suppress Syrian air defense in Lebanon. Since then Israelis have been behind a few of the successful long-range and high altitude drones and an Israeli based in the United States helped invent the MQ-1 Predator. However, the next generation of drones won’t be large armed drones deployed by air forces. Instead, they will be small drones that are operated by infantry and special forces units on the ground. Here, Israeli technology, including start-ups, is pointing the way again.

SpearUAV, which makes drones that are deployed from a canister or capsule, is seeking to transform the way unmanned aerial vehicles (UAVs) are deployed on the battlefield. It has made a line of UAVs, called Ninox, which come in several sizes from what it calls its Ninox 40 to Ninox 103. Spear unveiled Ninox earlier this month and showed off photos and video of the drone being deployed from a grenade launcher or from tanks and vehicles.  One fired out of its capsule the drones unfold and can conduct their missions.

I drove down to Tel Aviv to see the drone up close. One of the issues facing infantry and special forces units that want to use drones is that often they have had to get a hold of commercial drones because military-grade counterparts were not available or were still in the slow process of procurement. Several problems are involved when it comes to tactical drones. One issue is cost. Militaries want small drones that platoons can use but these types of drones need to be rugged or expendable because the nature of ground forces hiking through mountains or fighting in cities is that their equipment gets tossed around.

Second, tactical small drones need to be easy to use. While an air force operator of an MQ-9 Reaper drone can be trained for months and works in an air-conditioned command post, the soldier in the field needs to use their rifle and potentially pilot a drone on the side. That means using a tablet or some simple technology that soldiers already know how to use from civilian life, such as pointing and clicking on a screen. The company envisions the operator having an easy fold-down screen incorporated into a tactical vest, resting where a soldier might otherwise carry ammunition in pouches.

SpearUAV attempted to solve these challenges by putting their drones into a capsule. Think of basically deploying a drone from a tube, like the kind Pringles chips come in. This has the advantage that the UAV could be fired into the sky like a grenade or flare or it could be put on a tank in place of a smoke canister. This also means the drone can be easily packed into the field without concerns it might get dust or mud or water in it.

At the company’s headquarters in Tel Aviv, the place is festooned with different types of Ninox drones and the tubes they go in. There are prototypes and final models and three-dimensional printers doing work while engineers work on computers. On display are the Ninox 40, a 250-gram UAV that can fly for forty minutes; the Ninox 66 made for use with tanks and other vehicles with fifty minutes flight time, and the Ninox 103 that is designed for larger payloads with sixty minutes of flight time.

Gadi Kupperman, the founder and CEO, says that the systems were developed as a direct response to the need of military forces for immediate intelligence capabilities. “This is a groundbreaking technology that will revolutionize the battlefield.”

Founded in 2017 the company is an example of Israel’s defense industry potential. Small, agile, and full of former soldiers with expertise in engineering, it illustrates the kind of field expertise innovation that Israel has tended to be good at. This means creating quick solutions to problems of the modern battlefield. For instance, Israel pioneered the Iron Dome air defense system and also the Trophy protection for tanks.

Boaz Ben-Haim, head of business development is a former pilot like Kupperman. They both came from other large Israeli defense companies and they say their two dozen staff have similar backgrounds. Ben-Haim brings an example of one of the Ninox 40 drones to showcase. The material the drone is made out of is strong and feels different than what one is used to handing a commercial drone, which tends to feel vulnerable and fragile. The whole drone can be folded easily so it resembles a stick that can be stuffed into a tube. “We are creating a new dimension for the foot soldier,” Ben-Haim says.

For the average infantry soldier or special forces warrior not much has changed in terms of the basic equipment they have had access to over the years. Ben-Haim notes that their lethality hasn’t changed. Giving them drones, especially drones that may have munitions on them, what is called a loitering munition, would increase lethality. “For managing today’s chaotic battlefield the soldier needs affordable, scalable, accessible equipment,” Ben-Haim says. What this means is not letting the cost of these drones balloon. Instead, these encapsulated UAVs could even be expendable, which means not needing to have them come back to base and be repaired or their batteries recharged.

The capsules were designed with existing platforms in mind, so the Ninox 66 can fit in smoke grenade launchers that are already used by main battle tanks. Upgrades to the drone itself could include a better camera or communications or different payloads. The main advantage the drone has is that since it sits inside a ruggedized capsule it can be moved around on the battlefield up until the point of deployment.

There are successes and hurdles to cross to bring these kinds of encapsulated UAVs to the front line. First of all, the drone is in the pipeline of Israel’s Ministry of Defense with aspirations to be operational with the Israel Defense Forces. Then there are the issues of export to other friendly countries abroad. This system is ideal for countries that are focusing on hi-tech for frontline units and which are transforming their large armies into smaller, more lethal forces that are open to using new technology. This could mean countries like Australia or the United States. Other countries, such as the Philippines are also acquiring small drones for units fighting terrorism. Homeland security applications for small tactical drones also could see the Ninox used on border fences or facilities.

The coronavirus pandemic has made demonstrating weapons systems like this more difficult. That means finding local partners in various countries and also eventually having logistic support in other countries that might procure one of the drone types. Because incorporating a drone into grenade launchers could take time and because not all units use launchers as a standard-issue, the deployment of the drone through a launch tube, like a mortar, may be the first way it sees action. This is a learning curve developed from how flares are fired because a flare is also deployed from a tube.

The company notes that the concept of using expendable drones is new. However, Israel has been pioneering a number of drones that are expendable, usually in the format of what is called a “loitering munition.” For instance, Rafael’s FireFly is deployed from a canister and is designed to slam into a target. Rafael views its FireFly as part of its Spike family of precision-guided missiles, not as a drone. Nevertheless, the FireFly’s ability to hover over a target means it functions like a drone.

Like the Ninox it is also designed to be easy and intuitive to use. UVision also makes a line of loitering munitions and its Hero-20 weighs only 1.8 kilograms and is designed to be packed into battle. These systems have not been widely incorporated into infantry units which means most militaries have not taken tactical drone use to the next level. Ben-Haim notes that one of the issues facing drone operators and militaries is the need to get UAVs over a target quickly. A smuggler penetrating a border fence might only be in the area for a few minutes before driving away. Being able to deploy a drone quickly to follow the smuggler’s vehicle is essential. Deploying it from a tube from a vehicle also means it doesn’t take up much real estate on armored vehicles. Today’s vehicles are already festooned with a plethora of radar and communications and other weapon systems, so adding drones to their roof means taking up space. Putting the drone in a tube saves space.

After decades of the global war on terror, the U.S. military is shifting defense strategy to confront near-peer competitors such as Russia and China. That means using fewer counter-insurgency measures and needing more technology that can operate against enemies seeking to jam weapons systems or operating in GPS-denied environments. Tactical drones have come on the scene at this crossroads in military history. They may be ideal for a wide range of specializations, from special forces operations in places like Niger to anti-cartel operations in areas where drug trafficking is a threat. In large numbers, they could be incorporated onto armored units and infantry platoons. This requires militaries to adapt and decide to systematically acquire different types and layers of drones for units the way militaries once incorporated light machine guns or mortars.