I Served on One of America's Last Battleships. Stop Wishing for a Comeback. 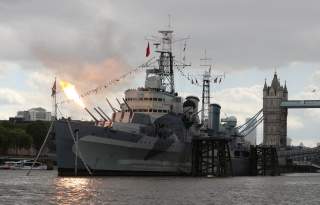 Let’s learn what we can from the past—but leave battleship reactivation to science fiction.​

There’s a mystique to battleships.

Whenever inside-the-Beltway dwellers debate how to bulk up the U.S. Navy fleet, odds are sentimentalists will clamor to return the Iowa-class dreadnoughts to service. Nor is the idea of bringing back grizzled World War II veterans as zany as it sounds. We aren’t talking equipping the 1914-vintage USS Texas with superweapons to blast the Soviet Navy, or resurrecting the sunken Imperial Japanese Navy superbattleship Yamato for duty in outer space, or keeping USS Missouri battleworthy in case aliens menace the Hawaiian Islands. Such proposals are not mere whimsy.

James Holmes is Professor of Strategy at the Naval War College and coauthor of Red Star over the Pacific.

(This article was first published last month and is being republished due to reader interest.)