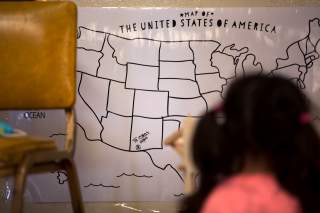 The Department of Homeland Security expects the number of new illegal immigrants coming to the U.S. to top 1.1 million by the end of the fiscal year in September. The border crisis is much talked about in Washington, but little progress is being made to address it. Rep. Mark Green, R-Tenn., recently took a trip to the border to see for himself what things are like. The Daily Signal spoke with him, as he shares his thoughts in an exclusive interview.

Rachel del Guidice: We’re joined today on The Daily Signal Podcast by Congressman Mark Green of Tennessee who actually just came back from a trip to the border where [he] spent several days in El Paso.

Congressman, thank you so much for joining us today.

Rep. Mark Green: Rachel, thanks for having me on the show.

del Guidice: It’s a pleasure to have you with us. So you just got back from El Paso and you saw up close and personal the situation that we’re in right now at our southern border. What are your major takeaways from this trip?

Green: I think, first and foremost, the people of ICE and [Customs and Border Protection] are doing phenomenal work and they’ve done phenomenal work in the midst of a massive crisis that overwhelmed the border with limited resources.

Now, with the 4.6 billion, they have resources to add facilities and resources. Food, water, all that stuff, trash, all the things that you have to do when you run an operation like they do. But just, first and foremost, their hard work and dedication to America.

I think No. 2 would be the absolute absurdity that our asylum laws have become and the perverse incentives that [they are] causing.

And I’ll give you an example. I think it was Monday night, I did a ride along with [Customs and Border Protection]. I’m out on the border, riding around with agents, and they apprehended three people in a family, a husband, wife, and a child that were from Brazil.

Now, Brazil is not any country that’s … nobody is suspecting Brazil of creating political refugees, etc. But they flew to Panama, and then from Panama flew to Cancun, and then from Cancun, a combination of bused and walked to our border, walked across, and they came up to the Border Patrol agents.

It’s not as if they’re trying to run away. They go and turn themselves in because they know that if they do so with a child, and if after processing, that child is determined to be theirs, they’re just released into the country with a court date, two to three years from now that they don’t necessarily have to show up.

And it’s really crazy. … With the asylum laws the way they are, we don’t have an immigration system in this country. I mean, people with a child come across the southern border, no matter who they are, where they’re from, and they’re just turned loose in the country. It’s crazy.

del Guidice: It is. I was at the border in April and they told us the same thing. Border Patrol said, “We will pick up a family if there are kids, we’ll process them, give them a court date,” and a lot of times they said these people never show up for that court date.

That’s why these ICE raids that were vilified by the left, and were effectively executed by the Obama administration, I might add … the president is right. President Trump is right. We need to go and find those individuals that have a court order saying they need to leave America.

I guess the third thing that really impressed me was the absolute contrast. In fact, it’s offensive what the Democrats have said about the border, claiming that people are drinking out of … toilets.

I spoke to the [Border Patrol] agent who was standing there when the woman described that she was getting water and she said the Spanish word, the Guatemalan Spanish word for bathroom.

And I don’t know about you, but I go to the bathroom and get a cup of water out of my sink and drink it. That’s essentially what the woman was saying.

Of course that caused … [Rep. Alexandria Ocasio-]Cortez thought she heard she was drinking out of the toilet. The press immediately blew that out of proportion and they’re … the people that are down there are in great … I mean it’s great conditions, significantly better than where many of them have come from. Air conditioning. They are separated by ages, and by gender, and things like that.

But there are no cages. There’s plenty of food. In fact, at the ICE facility I toured, the dietician who is providing them the menu and the nutrition of it all is the same individual who does it for Fort Bliss, Texas, our soldiers. And the menus are identical. So they’re getting fed the same, exact same thing, that our soldiers are being fed.

So this notion, this hyperbole, these incredibly false accusations from the left are offensive. It just pales. I can’t understand that they think that they can just walk all over the truth like this. I’m infuriated at that. So, those are probably the three biggies that I walked away from my trip with.

del Guidice: That’s incredible. And you mentioned, and I saw the photo that you posted on Twitter with the whole situation surrounding when Congressman Alexandria Ocasio-Cortez said that she had been down at the border and migrants were drinking water out of toilets. And you mentioned this just now as well, that you were there and that’s not the case.

Are there any other misconceptions that were brought to light when you were down there and actually saw what was happening versus what is being told on the media?

Green: Yeah, the nutrition piece, that’s been something that both Ocasio-Cortez and others have talked about. There are snacks that you and I maybe would call sugary snacks, but they’re there for the children to eat. You know, Doritos, potato chips, and things like that. Anyone who wants something can go up and get a snack 24/7.

But they have meals, hot meals, that are very nutritious. You know, as I mentioned earlier, using the dietitian from the military base. So if you look at the snacks and were to think, “Oh gosh, let’s tell everybody this is all the food they’re getting and they’re eating junk food.” Well, yeah, but that might be a perception you could have by looking at the stack of juices and things like that.

But the truth of the matter is they’re getting hot meals that are very nutritious, and then the snacks are just there to be available.

Another thing, too, they track everything. They track when the individuals eat. They even track when they shower, so they go to them and they say, “It’s been 24 hours since you showered, you’re on schedule to shower now.”

Obviously, they’ve got limited shower stalls, so they have to phase people first. They go and say, “Hey, it’s your turn, your code popped up on the system and it’s your turn for a shower. And oftentimes people will say, “No, I’m not interested.” You can’t force them, but they’re even tracking when it’s their turn for the next shower and going to them and [telling] them.

These guys are doing an amazing job down there and the best characterization. The falsehoods, the lies, are absurd.

del Guidice: Wow. That is really interesting. That’s something I myself have never heard. I also wanted to ask you, you toured an ICE facility and a Customs and Border [Protection] station. What were those experiences like?

You mentioned there not being cages. That was something that you did not encounter. What was that experience like? What did you see when you were there?

Green: Well, interestingly, at one of the infirmaries we went through, there was an Iraqi who had flown to Central America and walked up and come across the southern border. People are coming from all over the world.

But if you’re asking sort of the emotional sense, I think the biggest emotion I had was just frustration at the lies of the media and the far left. Clearly the people are well taken care of.

I think the other thing is, I’m proud of my country. One, for how they’re taking care of these individuals at the border. I’m also proud that people would want to come to America. Obviously, we’ve done some things right and we’ve got a great country and people want to come here. I understand. We just have to have a system of laws that work.