I Went to War on America's Last Battleship: They Won't Ever Sail Again 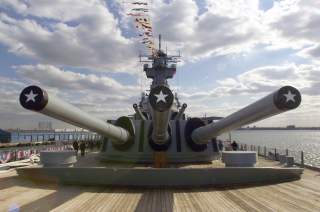 Age, in short, counts. Try leaving your car in the driveway for a few years with no maintenance, and then imagine the bill from your mechanic to put it back in driving condition. The odometer will remain low, but your wallet will be significantly lighter. It will take far more than the obvious things like fresh fuel, lubricating oil, and water to get your ride back on the road. Seals and insulation will have dry-rotted, paint will have faded or peeled off, rust will have encroached, and on and on. Other problems will lurk undetected.

And that’s in a simple contraption like an automobile. The potential for hidden mechanical woes is an order of magnitude greater in a warship, with its scale and complexity. We managed, and so did the crews of our sister battleships. But those were difficult ships to run—awful at times.

Next let’s turn to the human component of ships like Wisconsin. Admiral Bradley Fiske points out that the skill and élan of a weapon’s user determines how great a percentage of its theoretical combat potential commanders can wring out of the weapon. A skillful crew that gets lots of practice at sea might approach 100 percent—think of Captain Jack Aubrey making his gun crews in HMS Surprise repeat the process of loading, sighting, and discharging their cannon till they achieve a satisfactory rate of fire. Practice makes perfect.

The reciprocal: inexperience kills. If you could pit Surprise coming out of a long shipyard refit against Surprise returning from a long sea voyage, there’s little doubt who would prevail—even though the ship and crew were identical. An untried or less-than-proficient crew devalues even the finest weapon system. Fiske proffers the example of the War of 1812 battle matching the frigate USS Chesapeake against HMS Shannon, a man-of-war almost precisely Chesapeake’s peer in material and manpower terms. For him that sea fight constitutes a parable:

“These two ships were almost identical in size and in the number and kinds of guns, and in the number of officers and crew, and the battle was fought on June 1, 1813, in Massachusetts Bay, under circumstances of weather and other conditions that gave no advantage to either. If material and numbers of personnel were the only factors in the fight, the fight would have continued very long and ended in a draw. Did these things occur? No, the Chesapeake was captured in a little less than fifteen minutes after the first gun was fired, and nearly half her crew were killed or wounded!”

The finest implement is no better than its user, and Shannon commanded brutal superiority in the realms of seamanship and tactical prowess. Never underestimate the human factor. It’s the wellspring of battle efficiency and effectiveness. Battleship sailors liked to tell visitors they were handpicked for duty on board (and of course I was), but the rest of my shipmates seemed to come from the standard cross-section of races, creeds, and colors that comprises the U.S. Navy’s recruiting demographic. We did well, and so did our fellow battleship crews, mainly because we worked hard and honed the human factor.

Working hard wasn’t entirely by choice, mind you. It’s inevitable when you operate machinery with half the manpower its designers envisioned. Some 3,000 officers and sailors handled Wisconsin during World War II, under 1,600 in the 1980s. Automation helped reduce the workload, as did such modifications as removing four of ten secondary gun mounts. Nevertheless—especially in the engineering department—there was only so much automation could do. Designed in the 1930s, the plant was designed for manual operation, with sailors opening and shutting valves, starting and stopping pumps, and the like. It remained largely old-school into the 1980s.

This took its toll. For instance, engineers generally went into “port and starboard” duty when operating boilers and generators at anchor or pierside. Port and starboard means half the crew remains on board at all times, and the other half gets to go home after the workday. (When “shore power” was available things were better. To go on shore power, electricians plug massive cables into receptacles on the ship. Vital services run on electricity supplied from the local power grid.) Being away half the time while in port—and then putting to sea on an extended cruise, and being gone all the time—endeared steam engineers to their families.

Another peculiarity of battleship duty was the older demographics you encountered. The Iowas lay inert for over two decades before the Reagan administration summoned USS New Jersey back to the fleet in the early 1980s, beginning the cycle of reactivations. (New Jersey served briefly on the gun line off Vietnam.) Think about what such a long hiatus does to materiel and human capital. Big guns were no longer in service after the 1950s, our ammunition dated from the 1930s and 1940s, analog fire-control computers had given way to digital computers, and so forth. Our technology was excellent but dated.

And no one in uniform could school us on it. No one wastes time training to operate or overhaul ships that are no longer around. Skills start going stale instantly once a ship class retires from the fleet. Specialists age out of the service over time. To make up for the brain drain, the navy leadership recruited battleship sailors and technical experts from the World War II and especially Korean War eras to help us newcomers master the bygone generation of technology we were grappling with. Veterans taught the teachers.

Which brings us to the historical character of battleship service. These were ships with a past, and those oldtimers constituted a direct link to it. Many of them were accomplished storytellers as well as teachers. Interacting with them made it clear we were part of history, not just functionaries doing a job.

That sense of being part of something larger and older stems in part from the nature of the sea. Admiral Jim Stavridis observes that while the oceans and seas are vast in horizontal, geographical space, there’s also a vertical dimension to seafaring. It undulates back in time. When you walk out on deck, he notes, “you are seeing the same view, the same endless ocean that Alexander the Great saw as he sailed the eastern Mediterranean . . . and that Halsey saw as he lashed his Fast Carrier Task Force into combat in the western Pacific.”

Proclaims Admiral Stavridis, “the sea is one.” Historic ships amplify the effect. Imagine getting to actually take one of Admiral “Bull” Halsey’s fighting ships to sea, and into action against a new foe. That’s precisely what we did in Wisconsin, which reported to Halsey’s Third Fleet at Ulithi Atoll in late 1944, and which we took to the Persian Gulf in 1990. Historic ships, then, are artifacts that connect their crews to past events. They accumulate long traditions, bequeathed from generation to generation through stories and artifacts.

Present-day crews see themselves as keepers of that tradition, and as obligated to carry it on. I can literally say you’re reading these words because my engineering shipmates found a box of old engineering logs from the 1950s in our departmental office or “log room” on the eve of recommissioning, and we spent an evening poring over what our forebears spent their time doing in the same machinery spaces where we toiled. (It wasn’t much different.)

That concrete link to the past started a process that eventually launched me into studying diplomatic history and strategy. Such is the power of history, transmitted through the medium of inanimate objects, through reading, and by word of mouth. One hopes the U.S. Navy will grow younger in the coming years and decades as it adds newfangled platforms and sheds tired ones. Still, a youthful fleet will provide fewer opportunities to acculturate through vintage ships. All the more reason for us oldtimers to view ourselves as stewards of maritime history—and make every effort to pass it down to the next generation.

Spinning yarns about the sea, then, is more than an idle pastime. Stories build and preserve tradition. Let’s learn our history—and be avid storytellers.