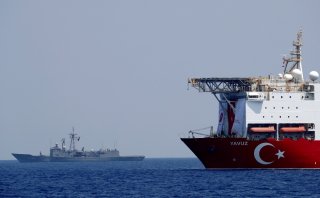 Over the next few days, European Union leaders will meet to discuss potential sanctions against Turkey based on Ankara’s aggressive energy claims against EU members Greece and Cyprus. Conflicting interests within the EU itself will likely preclude the bloc from actually imposing sanctions. But at the core of the recent crisis between Greece and Turkey lies a dangerous ideological model—not a mere dispute over energy resources. In the West, media outlets are mischaracterizing the true source of disruption in the Eastern Mediterranean. Although Turkey recalled its seismic research vessel Oruc Reis to the port of Antalya, this crisis is far from over—and now extends beyond Athens and Ankara. To be sure, Turkey’s Pan-Islamist, Neo-Ottoman ideology is the primary reason the Eastern Mediterranean now looks increasingly more like the South China Sea.

This reality should hardly come as a surprise, as the warning signs of regional disruption have been lying in plain sight. By ignoring ideological futures, Western media and governments alike have missed key signals and emerging trends that foreshadowed the present disruption. Over the past decade and a half, Turkey has sought to revive a classical, civilizational model of the Ottoman Empire’s legacy, underpinned by an embrace of political Islam. Through an alliance with Qatar and the Muslim Brotherhood, Ankara has openly promoted its Pan-Islamic brand, financing the construction of mosques across the globe and supporting mercenary Jihadists—in Syria, Libya, the Horn of Africa and the Sahel region of West Africa. The recent conversion of Istanbul’s iconic Hagia Sophia (once the Eastern Christian world’s largest cathedral and a UNESCO heritage site) into a mosque is the coup de grace.

This ideological model is a catalyst for Turkey’s flagrant revisionism, which now threatens the integrity of the NATO alliance and regional stability. President Erdoğan openly questions the Treaty of Lausanne (the 1923 agreement that sets the boundaries of modern Turkey) implying that Mustafa Kemal Ataturk made undue territorial concessions. Erdoğan has complained that Turkey “gave away” islands to Greece and flouted a 1920 plan that includes Turkish territorial claims to northern Syria, northern Iraq, Armenia, parts of Georgia, and even Iran.

The prevailing (and overly simplistic) narrative in much of the Western media focuses on the continuation of traditional, historical rivalries. Here, one comes away with the impression that two archrivals, Greece and Turkey, are simply rehashing their age-old disputes. But according to German newspaper Die Welt, President Erdoğan allegedly asked his generals to “provoke a war with Greece by sinking a Greek ship or downing a Greek fighter jet.” While complicated geopolitical dynamics are at play, the current crisis highlights the connection between Turkey’s dangerous ideological model and the true costs of its aggressive policy actions.

Egypt, the United Arab Emirates, Saudi Arabia, and Bahrain are increasingly converging on shared interests with Israel, as well as with Greece, Cyprus, and France. Over the past month, fighter jets from the UAE conducted training exercises with the Hellenic Air Force on the island of Crete. At the same time, France, Italy, Greece, and Cyprus also staged joint military exercises in the region in a clear show of solidarity. Egypt and Greece also concluded an agreement that defines their maritime borders and exclusive economic zones—nullifying Turkey’s attempt to establish a similar deal with Libya earlier this year. In case there was any equivocation, U.S. Ambassador to Greece Geoffrey Pyatt publicly stated Washington’s position that Greece’s islands have “exactly the same” continental shelf and exclusive economic zone rights as does any mainland territory.

While efforts to de-escalate the situation are in everyone’s interest, effusive praise of Germany’s mediation efforts is exaggerated. On the contrary, Berlin’s inability to muster a decisive EU response (putting off a vote to sanction Turkey until late September) sends mixed messages and imposes few consequences for Turkey’s aggressive behavior. Conflicting approaches from France and Germany in particular highlight the lack of an EU consensus in dealing with this security challenge.

In an earlier era, one might have concluded that Turkey’s foreign policy actions are “irrational,” as they diminish Ankara’s standing both in the region and the world. But if we interpret today’s crisis dynamics as the by-products of ideology warping a state’s rational self-interest, their underlying rationale becomes less opaque. Thus, we should not be shocked to see that President Erdoğan staged a public meeting on August 22 with two representatives of Hamas—a U.S.-designated terrorist group. Israeli Mossad Chief Yossi Cohen told his counterparts from Egypt, Saudi Arabia, and the United Arab Emirates, “Iranian power is fragile, but the real threat is from Turkey.”

Earlier this year, images of thousands of refugees attempting to cross from Turkey into Europe (encouraged by President Erdoğan himself to do so) displayed the human cost of Ankara’s irresponsible policies. While some assert that the crisis may be slowly de-escalating, one key dynamic all but guarantees a continuation of the tensions. Left unchecked, Turkey’s Pan-Islamist, Neo-Ottoman inspired ideology will enflame regional tensions well into the future. But—as we have previously warned—before Western actors can effectively deal with this phenomenon, they must first acknowledge its existence.

Dr. Jake Sotiriadis is the US Air Force’s Chief of Strategic Foresight and Futures Analytics. (The views expressed here are his own and do not reflect official positions of the Department of Defense or the Department of the Air Force.)

Dr. Marwa Maziad is Non-resident Scholar at the Middle East Institute’s Defense and Security Program and a Scholar at the University of Washington’s Jackson School of International Studies.