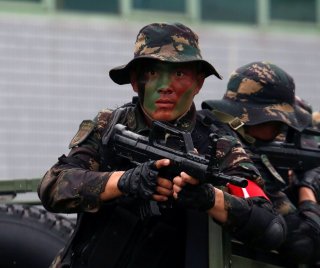 Since at least 1997, the QBZ-95 has been the People’s Liberation Army’s standard-issue rifle, replacing the older Type 81 assault rifle (which was itself a modified copy of the iconic AK-47). The rifle makes extensive use of polymers to keep weight low, and bullpup layout features the magazine loaded behind the trigger group.

Though the bullpup configuration initially gained traction with several countries—notably with the French and their FAMAS, the Brits’ SA80, and the Israeli Tavor—it has since been looked at less favorably. On paper, the bullpup is a close-quarters combat dream. The compact layout keeps overall length to a minimum without sacrificing barrel length. However, a non-adjustable buttstock and an unergonomic layout are drawbacks. Specific to the QBZ-95, the rifle does not have a safety near the trigger, a potential hazard.

Despite improvements to the QBZ-95, including a heavier barrel and improved round, these revisions were likely not implemented for all QBZ-95s in service, indicating that rather than incremental changes, the People’s Liberation Army was more interested in finding a completely new platform.

Recently a replacement for the QBZ-95 was seen. This new rifle, tentatively called the QBZ-191, is a much more conventional-looking weapon more in line with the M16 family. At least outwardly, the QBZ-191 appears in some way similar to the Heckler & Koch 416 rifle, recently adopted by the United States Marine Corps as the M27.

One of the more noticeable differences is the addition of a Picatinny-style rail for mounting optics. In contrast, the older QBZ-95 relied on iron sights. The rifle apparently comes in three different variants: a carbine with a shorter barrel, a longer-barreled designated marksman rifle, and a standard-issue rifle.

Like both the United States and the Soviet Union, China opted for a smaller, intermediate-sized rifle cartridge to replace larger caliber, lower-velocity rifle cartridges—the advantage being that the individual soldier could, in theory, carry more rounds of ammunition at the same weight point.

Most recently, improvements made to the 5.8x42mm round include a hardened steel core for improved armor penetration. The bullet is further streamlined for better long-range performance.

Although the QBZ-95 is perhaps not the crème de la crème of standard-issue service rifles, the newer QBZ-191 is nothing to sneeze at. Especially when considering the 5.8x42mm cartridge, the People’s Liberation Army forces have an answer for future fights.