If The NBA Won't Stand Up To Chinese Bullying, What Should We Expect From Other American Companies? 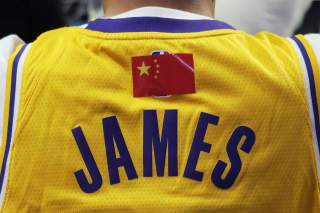 One way to pitch a Hollywood screenplay is by combining two existing works. “Think of it as ‘Wolverine’ meets ‘Lincoln.’” Apparently this actually happens. Anyway, the descriptive technique also pops up elsewhere. The geopolitical tangle — economic, military, ideological — that is China can be expressed as “the Soviet Union meets 1980s Japan.”

Dealing with such a multidimensional challenge is difficult, as the NBA just found out. Its apologetic stance toward China over a Houston Rocket official’s pro-democracy tweet — “Fight for freedom, stand with Hong Kong” — has brought Americans together as few if any recent issues have. The bipartisan outrage over that apology parallels the growing bipartisan consensus that US foreign policy toward China needs a significant course correction.

And American business might be forced to change its ways, too, even if all the tariffs go away. The Hong Kong protests increasingly look like a dystopian film with an authoritarian Goliath vs. democratic David storyline that’s easy for Americans to follow. So, too, the detention of China’s Uighur minority inside reeducation camps that’s starting to resemble a rerun of the worst bits of the 20th century. It’s one thing for American firms to outsource manufacturing and develop markets in non-democratic China that seems to be following the same road as South Korea toward liberal democracy — but quite another when the endgame might be a totalitarian surveillance state.

Yes, talk of an NBA boycott is less about China’s human rights abuses over there than attempts to limit free speech over here (limits that can take a variety of forms). But the backlash might grow. This incident along with the new focus on China as a threat could lead to efforts at cultural boycott. Maybe public pressure will force the NBA to abandon its training camp in the same region where the Uighur population is being rounded up. Maybe Hollywood actors and directors will stop attending red-carpet premieres in Shanghai.

Back in the 1980s, such cultural boycotts helped undermine and delegitimize South Africa’s racist apartheid government. Human rights are intrinsically important, but also a powerful potential lever against Chinese ambitions. No one wants to be a pariah nation — especially not one with global commercial ambitions. Of course, China is a lot bigger and far more deeply intertwined in the global economy than South Africa was. Still, maybe the lack of Chinese democracy and human rights is something Washington should talk and care about a lot more.

James Pethokoukis is the editor at AEIdeas and a DeWitt Wallace Fellow at the American Enterprise Institute.