If Russia Invades Ukraine Again, These RC-135 Surveillance Planes Will Be the First to Know 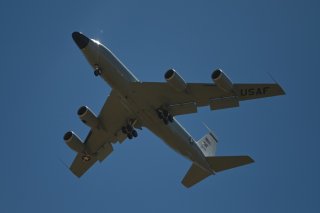 U.S. Air Force RC-135 surveillance planes have been flying key missions along the Ukrainian-Russian border to monitor troop activity, track movements, and ensure readiness in the event of an attack.

The aircraft are in position to send back real-time images of force positioning along Russia’s side of the border to ensure ground and air forces are best positioned to defend a Russian incursion.

“We’ve got to make sure we are ready. Readiness is the key to conventional deterrence... Russians are well aware of the capabilities that NATO possesses in the context of airpower,” Gen Jeffrey L. Harrigian, Commander of the U.S. Air Forces in Europe, U.S. Air Forces Africa and Allied Air Command and Director, Joint Air Power Competence Centre, told the Mitchell Institute for Aerospace Studies in an interview.

Ukrainian, U.S., and NATO forces in Eastern Europe are working on a range of potential strategies with which to deter Russian forces without necessarily massing a huge ground force along the Russian border. NATO, Ukraine, and other U.S. allies likely do not wish to forward deploy a large mechanized ground force.

Several things are likely informing this equation alongside surveillance planes including the threat of U.S. and NATO air power. European F-35 Lightning II stealth fighter jets and other forward-positioned fixed-wing air assets could be key, as any Russian invasion into Ukraine would likely need air superiority to ensure sustained progress or an ability to hold territory. With this in mind, it is not entirely clear if Russia has enough operational Sukhoi Su-57 fighter jets with which to challenge U.S. and European F-35s.

Not only are more countries such as Finland choosing the F-35, but the United States has now forward-positioned its own F-35s on the European continent, well within range of Ukraine. Larger numbers of operational F-35s are also appearing in key allied F-35 countries such as Norway, Italy, the Netherlands, and Poland, creating a multi-national force of fifth-generation aircraft. The existence and presence of this force, certain to be demonstrated and potentially even flown by U.S. and allied forces within striking range, may be enough by itself to deter Russian action. When faced with a U.S., NATO, and European F-35 force, advancing Russian forces would likely face little chance of success, as they would simply be destroyed from the air.

Advancing Russian forces, should they have ground war overmatch against a smaller, more lightly armed Ukrainian force, could be extremely vulnerable to high-altitude bombing and Close Air Attacks from bombers and F-35s. In and of itself, the prospect of U.S. and allied air superiority might be enough to prevent Russian and avoid any need to forward deploy a large NATO ground force to Ukraine.

Demonstrating air power to prevent a Russian attack must also be managed carefully by military decisionmakers and officers at the edge of combat, Harrigian said.

“We all want diplomacy to work. Let’s drive down the possibility of miscalculation,” Harrigian said.