If South Carolina Was a Country, Joe Biden Would be President For Life 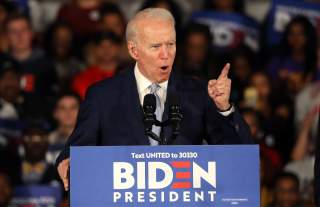 By now you have heard the news: Joe Biden gave his primary rivals a thumpin’ in South Carolina, a state the former veep leaned on as the one levee between himself the floodwaters of electoral failure. Biden needed to notch the Palmetto State into his column, and he delivered with flying colors, winning every single county and 76% of the delegates.

The old pol also ran up huge margins among a variety of voting demographics,  winning 61% of the African American vote, 51% of voters between the ages of 45-64, a 42% plurality of Democrats who considered themselves very liberal, and 50% who believed health care was the most important issue. Biden looked newly invigorated on stage after the race was called immediately in his favor, cracking the wide smile Uncle Joe is known for and promising to take the fight to Super Tuesday with the wind at his back. Let’s just say if South Carolina was its own country, Joe Biden would be president for life.

The next giant leap forward: this Tuesday, March 3, when 14 states across the country pull the lever to determine who is the best Democratic nominee to joust with Donald Trump in the fall. Biden’s victory in South Carolina will mean nothing if he doesn’t put up a respectable showing on Tuesday; no candidate in this race can claim they hold the key to a Democratic takeover of the White House if they go to bed at night blown out of the water.

As a political veteran, Biden surely knows this. Yet the primary schedule may be a detriment to his ability to ride the momentum from last night. Biden's South Carolina performance will fill up his coffers for the time being, but two days is not nearly enough time to change people’s minds. There is only so much ad time you can buy between South Carolina and Super Tuesday.

Bernie Sanders certainly would have liked to claim South Carolina as his own, but he knew how much of a long-shot a victory would have been. Despite the television roundtables talking up Joe Biden as the new “comeback Kid” a-la Bill Clinton in 1992, Sanders is still in a great position to score the majority of delegates on Super Tuesday. He is dominating in California, where an aggregation of polls from RealClearPolitics puts the Vermont senator up by 17 points; is managing a 9-point lead in Texas; is on top in Colorado by 12 points; and is in good shape in Massachusetts, where a win would kill whatever is left of Sen. Elizabeth Warren’s presidential aspirations. Each state holds a hefty amount of delegates; indeed if Bernie’s margins prove decisive enough in California and Texas, he could likely still claim to be the victor of the night even if he came up short everywhere else.

Biden, however, has some favorable terrain as well. He is leading in Virginia, has a decent shot at winning North Carolina and Tennessee, and looks to be in a comfortable position in Alabama as well. All four southern states have sizable African American voting blocs, which has proven to be the savior for Biden’s third presidential bid. If the vice president runs up the tally in the south and picks off a few congressional districts in California with heavy minority populations, he could continue to argue that no other Democratic candidate—not even Bernie Sanders—has the ability to attract support across the entire Democratic Party electorate.

Forget about Michael Bloomberg’s billions of dollars, Amy Klobachar’s work ethic, and Pete Buttigieg’s message of unity. The Democratic primary is shaping up to be a contest between a 78-year old populist firebrand who wants to break the system and a 77-year old life-long establishment Democrat who believes in his heart that building on the work of Barack Obama, the Democratic Party’s most popular politician, is the best journey for the country. Everybody else in the race is either a narcissist unable to accept defeat, delusional about the prospects of their success, or clinging for a last-minute miracle.