If You Saw This Picture, an Aircraft Carrier Just Went to the 'Bottom' (In a Simulation) 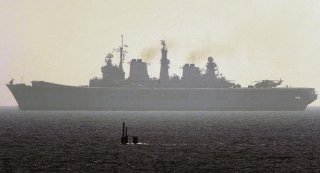 A photo taken in 2016 depicting an American nuclear-powered submarine poking its periscope above the waves—within shooting distance of a British aircraft carrier during a war game—is a useful reminder of one of the most important truths of naval warfare.

To prove they could have sunk the carrier, Corner Brook’s crew snapped a photo through the periscope—and the Canadian navy helpfully published it.“The picture represents hard evidence that the submarine was well within attack parameters and would have been successful in an attack,” boasted Cmdr. Luc Cassivi, commander of the Canadian submarine division.