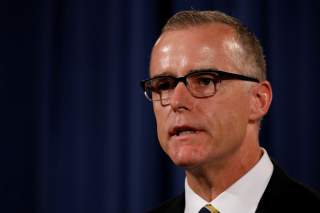 Andrew McCabe hyped Christopher Steele and the infamous dossier in an October interview, saying the FBI was unable to disprove much of the information in the salacious document, and that the bureau had relied on the ex-British spy’s information in the past for use in criminal indictments and search warrants.

“Steele had a history of good reporting to us … information that was judged to be so accurate that it was used in things like arrest warrants and indictments,” the former FBI deputy director continued.

But McCabe left out the full story about Steele, the dossier, and the FBI’s investigation of the report — one that was detailed extensively in the Justice Department inspector general’s report released Dec. 9.

The report said, contrary to McCabe’s claims, that the FBI was unable to corroborate any of Steele’s specific allegations about Donald Trump or members of his campaign, including Carter Page, who was the subject of FBI surveillance that was based heavily on the dossier.

Steele had told the FBI in early October 2016, three weeks before the bureau won approval to surveil Page, that one of his main dossier sub-sources was a “boaster” and “embellisher.” And in January 2017, Steele’s main source disavowed much of the information that Steele attributed to him in the dossier.

The IG report also undercut McCabe’s comments that the FBI had previously relied on Steele’s information on other cases to secure search warrants and indictments.

Instead, a supervisory FBI agent said the Crossfire Hurricane team merely “speculated” that Steele’s information was used in an investigation into possible bribery involving FIFA, the international soccer organization.

The report stated that while Steele provided a tip about who the FBI should contact as part of the probe, “Steele did not have any role in the investigation itself, he did not provide court testimony, and his information did not appear in any indictments, search warrants, or other court filings.”

Steele’s handling agent also told the IG he informed the Crossfire Hurricane team that Steele did not provide information in the FIFA case.

The report said Steele’s handling agent was “bothered” that the Crossfire Hurricane team claimed in court filings that Steele’s information had been used in criminal proceedings.

McCabe is not the only former FBI official to hype Steele’s reliability, and to defend the FBI’s handling of the dossier.

Former bureau officials like Jim Comey and James Baker have repeatedly asserted that the dossier’s broad claim of Russian interference in the 2016 has proved accurate. But they’ve typically dodged questions about inaccuracies in the dossier.

McCabe has also refused to go into detail about what work the FBI actually did to verify Steele’s information before using it to assert to the federal surveillance court that Carter Page was a Russian agent.

“Specifically, what was verified in the dossier before it was used?” Washington Examiner reporter Jerry Dunleavy asked McCabe at an event Oct. 31.

“So the answer to your first question is ‘no,'” McCabe replied, “I will not go into specificity about what the FBI verified prior to the FISA or after.”

The IG report lays out a series of “significant” errors and omissions in the FISA applications. In virtually every example cited, the information that FBI agents withheld was either exculpatory for Carter Page or derogatory for Steele and the dossier.

The applications failed to disclose that Steele told FBI agents Oct. 3, 2016, that he considered one of his main sub-sources to be a “boaster” and “embellisher.”

In January 2017, Steele’s only collector of information told FBI agents that the ex-spy misrepresented or exaggerated key claims in the dossier regarding Carter Page, as well as an alleged blackmail tape involving Donald Trump and Russian prostitutes.

The Steele source told FBI agents that the information was based on “rumor and speculation,” and had not been confirmed, as was asserted in the dossier.

The report noted McCabe was provided a two-page summary of the sub-source’s statements to FBI agents, but that the report did not mention the inconsistencies between the statements and the dossier.

The IG report said Steele’s claim that former Trump lawyer Michael Cohen met in Prague with Kremlin operatives to pay off hackers was “not true.”

The New York Times reported April 19 that the FBI had determined by summer 2017 that the Cohen-Prague claim appeared to be false.

Despite that, McCabe told Bernstein that Steele had “a very solid track record.”

“Some of the information was consistent with reporting we were getting from other sources, so that’s always to his credit,” McCabe told Bernstein, leaving out all of the other issues with Steele’s reporting.

McCabe’s defense of Steele’s reputation as a reliable source is undermined by other findings in the IG report.

It said the Crossfire Hurricane team interviewed Steele associates in November and December 2016 who raised questions about the former spy’s judgement.

Bill Priestap and Peter Strzok, who served as chief and deputy chief of FBI counterintelligence, respectively, interviewed Steele associates who said he “[d]emonstrates lack of self-awareness, poor judgment” that he was “underpinned by poor judgment” and that he “[d]idn’t always exercise great judgment sometimes [he] believes he knows best.”

The report said that McCabe was frequently briefed about Crossfire Hurricane, but it is unclear if Priestap and Strzok told him about the comments about Steele.

McCabe, a CNN analyst, could not be reached for comment.