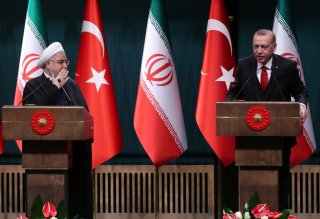 “It’s complicated” goes the common refrain in erstwhile relationships, be they familial, friendly, romantic, or, in the case of the Republic of Turkey, the United States’ fellow member of the most powerful mutual defense alliance in history, the North Atlantic Treaty Organization.

Turkey’s flirtations and defense procurement deals with the Russian Federation, its unilateral and destabilizing action along its shared border with Syria, it’s troubling on again/off again coziness with the Islamic Republic of Iran (including charges of laundering Iranian regime money through state-run Halkbank), and Turkey’s outward antipathy with the United States’ most critical ally in the region, Israel, leave much to be desired in a fellow treaty member upon which the United States and Turkey would, ostensibly, rely upon each other in the event of an attack under NATO’s Article 5.

Turkey, of course, remains expelled from the United States’ highly-coveted F-35 Joint Strike Fighter program and subject to United States sanctions designation owing to its 2019 acquisition, and subsequent 2020 operational testing, of the Russia-developed S-400 surface-to-air missile system. The Trump Administration rightly employed “hard power” against Turkey who, despite warnings from the United States on materiel procurement from Russia proceeded to do so anyhow.

Despite this, it is not NATO ally Turkey that the Biden administration continues to dangle the soft-power “carrot” of relief from hard power sanctions (“the stick”), but rather the region’s, if not the globe’s, largest state sponsor of terrorism: Iran. The same Iran for which the Pentagon directly attributed the deaths of 603 Americans during the Iraq war. The same Iran that refers to the United States as “the Great Satan” and has pledged to “erase Israel” from the Middle East—the same Iran that has continued to enrich uranium beyond internationally prescribed levels in furtherance of its nuclear program.

All that to say, the Biden administration has curiously sought to employ soft power with a nation bent on threatening U.S. interests and allies, while continuing a hard power approach with Turkey. Former U.S. government official and Harvard professor Joseph Nye defined soft power in national security as attracting and coopting, rather than compelling action: enticing as opposed to coercing. The flaw of employing soft power ploys with the Iranian regime is that the very essence of the 2015 Joint Comprehensive Plan of Action, soft power inducement for Iranian non-proliferation, resulted in continued and flagrant Iranian violations.

Consequently, former President Donald Trump rightly withdrew the United States from the JCPOA in 2018 and incrementally ratcheted up the “maximum pressure campaign” on Iran as it continued to flout the terms of the agreement. Iranian non-compliance continued, but with one important distinction: the regime’s critical infrastructure, trade, currency, and ability to traffic Iran’s native and bountiful petroleum resources all became severely hampered.

As former Ambassador Fred Hof successfully pointed out in a recent piece on Iranian nuclear intentions, some national security experts and regional partners agree that a renewed JCPOA could be tantamount to benefiting Iran with soft power sanctions relief while allowing it to do just what the JCPOA purports to preclude: develop a nuclear weapon.

Fast forward to NATO ally Turkey, while the United States sanctions designations imposed on Turkey in 2020 under the Countering America’s Adversaries Through Sanctions Act (CAATSA) remain, there seems no overture from the Biden administration to employ soft power negotiations with NATO ally Turkey to peel Turkey away from nefarious Russian arms sales or to rejoin the mutually beneficial F-35 program.

In the 2020 Abraham Accords, the United States, under the Trump administration, brought together Israel, the United Arab Emirates, and Bahrain in a first-in-history security, cultural, scientific, and commercial pact and a new way forward. In the decades and years preceding the Accords, skeptics would have suggested the impossibility of such an event. For the Biden administration to conceive that soft power, as employed in the Abraham Accords, could not rectify erstwhile ally Turkey’s S-400 misgivings is to lend more global credibility to Tehran than Ankara, its Russian warts and all.

This is not to dismiss Turkey’s discordant materiel procurement that led to the proper imposition of sanctions, but when zooming out in the region and the geostrategic rubric of the Middle East, the Biden administration should bear in mind that Turkey’s role in constraining the Assad regime in its multi-year offensive into northwest Syria’s Idlib Governorate. But for Turkey’s defense of its outposts along its forward line of troops, Assad, alongside his military patron Russia, would have long since steamrolled Idlib, triggering a massive humanitarian displacement. Turkey is not without fault in the chaos that governs northern Syria, but staving the displacement of over a million more war-torn refugees to the penumbra is not insignificant.

Iran’s deeds of late? Announcing increased levels of uranium enrichment, signing a twenty-five-year economic and security cooperation agreement with avowed U.S. foe China, and attempts in Vienna to dictate terms of Iran’s nuclear non-compliance via international interlocutors to representatives of the Biden administration.

Soft power-driven sanctions relief has its place in foreign policy negotiations. Turkey has been a clearly ambivalent ally in near memory—their many unilateral incursions in Syria and general military coziness with Russia are indefensible.

That Iran, though, the clearest threat to U.S. interests, stability, and security in the Middle East purports to suggest terms under which they would be willing to entertain current U.S. diplomatic overtures while a NATO ally benefits from no such similar treatment suggest a need for the Biden administration to reassess its soft power approach. Carrots of soft power are a rightfully limited commodity in foreign policy—President Joe Biden and company should be not unmindful of the need for their prioritization and sequence.

Peter Metzger is a former Special Assistant to the President for National Security Affairs and Deputy Senior Director for Middle Eastern and North African Affairs on the National Security Council at the White House.